Owner Gets Probation in Immigration Case

A Washington State drywall company and its owner have been sentenced for illegally hiring workers in violation of immigration laws.

David L. Jones, 47, the owner of DJ Drywall Inc., based in Snohomish, had pleaded guilty in February to knowingly encouraging and inducing a Mexican national to live in the U.S., according to U.S. Attorney’s Office for the Western District of Washington. 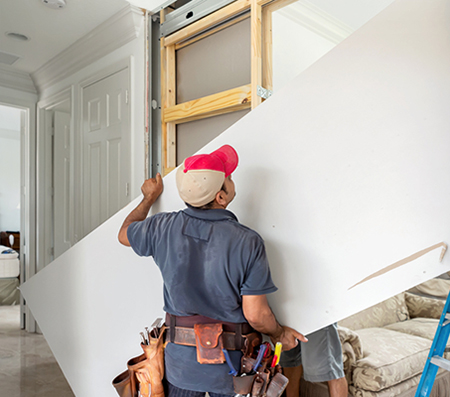 Judge Ricardo Martinez ordered Jones and his company to pay $100,000 in fines and five years of probation.

It’s not the first time Jones has run afoul of immigration laws. His company previously paid fines totaling $59,721 in 2008 and 2011 related to immigration violations.

His probation also requires Jones to qualify all his employees through the E-Verify system.

During the sentencing hearing Thursday (June 2), the prosecution praised Jones, the father of three, for pulling himself out of “dirt poverty” in Mexico, raising a family and making what had been a fortunate life, according to an in-depth report on the case.

Jones was one of 58 children born into a polygamous enclave in Mexico, seattlepi.com reported.

After leaving his family at age 15, he joined his brother in San Diego and later moved to Washington in the early 1990s, building a life around drywall.

Before starting his own company in 2006, he worked for Ketchikan Drywall Services, one of the largest installers in the state, the report said.

Ketchikan Drywall itself was previously fined $173,250 after being found to have violated federal immigration laws 225 times in an administrative action brought by the Bureau of Immigration and Customs Enforcement officials. To date, no criminal case has been brought against that employer.

Jones, however, was criminally charged in May 2013, after a tipster said he was paying low wages.

The investigation ultimately found that Jones hired a superintendent he knew to be in the country illegally, hid his hiring of three other undocumented workers and told two others to get fake identification papers, the report related.

“For 20 years Mr. Jones’ employment practices have been indistinguishable from thousands of other employers nationwide who have ignored (the Immigration Reform and Control Act) at no peril,” Assistant U.S. Attorney Don Reno reportedly said during the sentencing hearing, noting that the case brings to light the failures of the current legal framework regarding immigration.

“The crime is rampant in our country and there’s no fix for it,” he said.

In speaking to the federal judge, an emotional Jones said, “At some point I’ll be an example to my family and friends of what not to do,” the report added.