Alleging exposure to toxic levels of lead while refurbishing a freighter, a shipyard worker has filed a lawsuit against the Wisconsin facility where work was performed earlier this year.

James Holder, 48, is seeking minimum of $75,000 in damages from Fraser Shipyards for alleged lead poisoning and exposure to other toxins in the workplace, according to the complaint filed Wednesday (May 25) in the United States District Court for the Western District of Wisconsin.

This could be the first of more lawsuits to come, attorney Matthew Sims told the Duluth News Tribune Thursday (May 26).

"We have other clients who have suffered lead poisoning," said Sims, who is representing Holder for the Chicago-based Rapoport Law Offices.

"We anticipate additional lawsuits will be filed in this matter with respect to our clients who suffered lead poisoning aboard the Herbert C. Jackson." 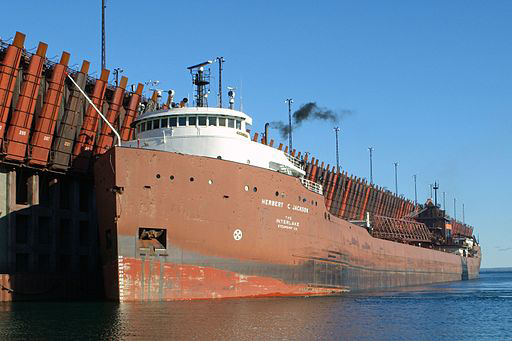 By p.Gordon / CC BY 2.0 via Wikimedia Commons
James Holder, 48, is seeking minimum of $75,000 in damages from Fraser Shipyards (not shown) for alleged lead poisoning and exposure to other toxins while working on the refurbishment of the Herbert C. Jackson.

The suit also names as defendants Interlake Steamship Company, which owns the freighter, and Northern Engineering Company, a subsidiary, along with Fraser Shipyards, of the Duluth-based Capstan Corporation.

Earlier this year, an Occupational Safety and Health Administration hazardous materials investigation confirmed the presence of lead at the Superior-based Fraser Shipyards after a complaint had been filed with the agency.

The paint in question was found on the interior of the Herbert C. Jackson, a 690-foot Great Lakes bulk carrier ship, which was the target of a major re-powering project that began in January. In addition to lead, the investigation was also looking at levels of chromium-6, which can be generated during welding on stainless steel or metal coated with chromate paint, sources said.

Immediately upon OSHA’s notification, the company alerted employees, halted all work on the affected areas, hired a remediation organization to remove lead paint in the areas that will be disturbed and provided free lead level screenings to employees.

Holder, a welder and ship fabricator, reportedly worked on the Jackson while employed by a subcontractor, Tradesmen International, which is not part of the suit.

The legal documents note that, as part of a 10-year modernization effort, Interlake had contracted with Fraser Shipyards to convert a steamship fleet to automated diesel propulsion systems. Fraser shipyards subcontracted with Tradesmen International to perform specific skilled work during the conversion and refurbishment.

Working for Tradesmen, “Holder’s work included cutting out old steel with a torch which involved burning through paint in order to cut out old steel and replace it with newly fit steel,” the lawsuit explains.

Holder used abrasive blasting tools and welding torches to blast, cut, chip, heat and weld painted surfaces aboard the vessel, which allegedly exposed him and other workers to toxic fumes and airborne particulates.

Workers began notifying the defendants of unusual health conditions and ailments, the suit claims, but their complaints were reportedly ignored and not investigated, and workers, including Holder, were told “there was nothing to be concerned about.”

When Holder was later diagnosed with lead poisoning, the levels of lead in his blood were more than seven times the level recognized by the Centers for Disease Control and Prevention as being harmful, according to a statement from the law firm.

The suit specifies that Holder’s blood-lead level (BLL) on April 1 was 36.5 micrograms per deciliter (μg/dL), considered “critical” by the CDC.

A BLL of even 5 μg/dL is considered to be “elevated” by the CDC, the suit explains, adding that the CDC indicates harm has been known to occur at exposures at those levels and lower.

“If the plaintiff had his BLL measured earlier and closer to the time of his last exposure to the hazards of lead poisoning, he would have had an even higher level of lead than the measured ‘critical’ value of 36.5 μg/dL found on April 1, 2016,” the suit claims.

"Mr. Holder suffered terrible joint pain, illness, decreased cognition, problems with his nervous system and gastrointestinal issues," Sims told the Tribune. "Basically, the way it's been described to me is it feels like you're dying."

Holder has returned to work “on a limited basis” in his home state of Virginia, Sims added.

The lawsuit faults the defendants for violating the Wisconsin Safe Place Statute by failing to take steps to warn of the presence of toxins aboard the ship and then, once workers began to fall ill, concealing the presence of critically high levels of lead, the attorneys office says.

“During the work, the defendants and each of them, were responsible for safety and safe working conditions,” the suit reads.

The lawsuit claims that Interlake “knew from the start” that its vessel, originally constructed and built by the Great Lakes Engineering Works in 1959 for Interlake, was coated in lead-based paint on many surfaces.

Similarly, Northern Engineering and Fraser Shipyards, having long been in the business of vessel repair, should have known of the presence of lead paint and high likelihood for exposure to toxins on the freighter, as well as “the dangers inherent in the refurbishment of ships, including the dangers of exposure to toxins such as lead.”

The lawsuit seeks compensation for Holder’s suffering as a result of his high levels of lead exposure and punitive damages against the defendants for their “intentional disregard of the safety of a shipworker who suffered lead poisoning.”

Holder has requested a trial by jury.

The defendants have 21 days upon receipt to respond to their summonses, which had not yet been served as of this writing.