Dubai, working to establish itself as a global hub for 3-D printing, unveiled what it called the world’s first 3-D printed office building this week. 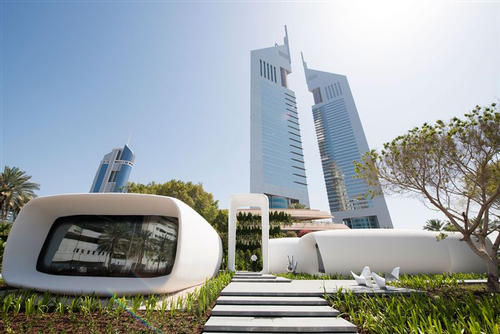 Photos: Government of Dubai
The building area is 2,691 square feet, and “an arc shape was adopted for the building for safety purposes and to ensure the stability of the building.”

The plan for the building was announced last year, and will eventually be home to Dubai’s Museum of the Future.

First of Its Kind

According to the government of Dubai, the building is “the first of its kind prepared for actual use.” Buildings have been constructed using 3-D technology before, including a five-story apartment building in China, but none engineered specifically to be a functional office building, according to Dubai.

The main printer used to make the building components was 120 feet long and 40 feet wide, and a full 20 feet tall, according to Dubai officials, and the building is constructed of a mix of cement and “a set of building material designed and made in the UAE and the United States.” The printer and additional secondary printers were located onsite during the build.

The printing of the building took 17 days, according to the government, and labor costs were less than 50 percent of what they would be with a comparable traditionally built structure.

The building area is 250 square meters (2,691 square feet), and “an arc shape was adopted for the building for safety purposes and to ensure the stability of the building,” according to Dubai officials.

Last month, Sheikh Mohammed announced a plan to make 25 percent of all new construction in Dubai 3-D printed by 2030.

"We implement what we plan and we pursue actions, not theories,” Sheikh Mohammed is reported to have said at the opening. “The rapidly changing world requires us to accelerate our pace of development as history does not recognize plans but achievements."

Dubai is looking at the office building as a model for future projects to work from.

"We see this project as a case study that will benefit regulators as well as research and development centres at the regional and international levels on real application of 3-D printing technology,” Sheikh Mohammed said. “We are documenting this experience and building on it to take advantage of the most important lessons, which will serve as reference points to take this technology to new levels."