One doctoral candidate at a Danish technical university has developed a coating test method that takes a novel approach to analyzing coatings performance.

Questioning whether current applied testing methods deliver a realistic picture of the coating in service, student Asger Lindholdt designed a unique testing process as his Ph.D. project for the Technical University of Denmark (DTU) Department of Chemical and Biomechanical Engineering.

Lindholdt’s technique utilizes a raft placed in the waters of Roskilde Bay for an extended period of time in order to test a variety of coatings as though they are in service, the university explains in a statement. 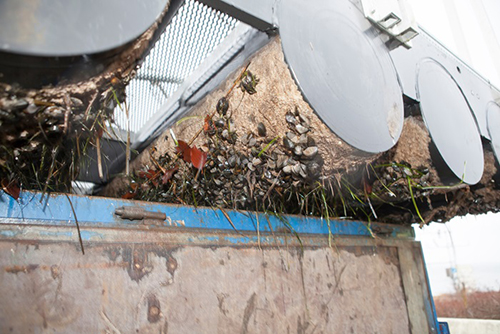 Photos: Technical University of Denmark
Current applied testing methods for antifouling coatings do not always paint a realistic picture, as they only include testing of newly painted ships or they are only tested in a static environment, doctoral candidate Asger Lindholdt says.

The Value of Testing

The Chemical Reaction Engineering and Combustion (CHEC) research center at DTU considers coatings research an important part of its portfolio.

In fact, in the late 1990s, CHEC initiated some of the very first projects that were to create robust coatings to protect ships against biofouling on their hulls during long voyages, according to the school.

Fouling represents both an environmental and a financial challenge to the maritime industry, the school explains. If a company produces an antifouling coating that doesn’t deliver its intended properties, “it can be devastating for business. Therefore, much time goes into testing,” it says.

Lindholdt was skeptical of antifouling coatings testing that involved either newly painted ships or coatings tested in a static environment that doesn’t consider the fact that ships tend to be in motion for periods of time.

“In reality, the coating is exposed to many different marine environments, weathers and amounts of friction depending on how much, where and at which speed the ship is sailing,” Lindholdt says.

To simulate these conditions, Lindholdt and his research team at CHEC designed a raft that was positioned in what is described as “the murky waters of Roskilde Bay” for a full year.

The raft contains cylinders of different coatings. For about 60 percent of their time in the water, they cylinders turn to replicate the movement of sailing. For the remaining 40 percent of the time, they remain still to mimic a ship’s time stationed in a harbor.

“I hope this new method will give paint companies a better opportunity to discover faults in the coatings during the early stages of testing and thereby provide their customers with more accurate guarantees,” says Lindholdt.

Preventing biofouling is not the only area of research at CHEC, the school points out.

Professor Søren Kiil, one of Lindholdt’s supervisors, says the research center is completing another project on blade coatings for windmills.

“In this project we designed and constructed an accelerated test method for rain erosion and we were able to investigate the mechanisms underlying this complex phenomenon.”

Additionally, the research center recently partnered with FLSmidth and Hempel to start a large project underwritten by Innovation Fund Denmark.

In this collaboration, CHEC will focus on developing new accelerated test methods and coatings for the cement and mineral industries. These methods will be designed to address challenges related to acids and abrasive particles, as well as sticky raw materials such as moist clay and gypsum, the school notes.

“Last, but not least, we are also getting into anticorrosive coatings for high pressure conditions which can be used in oil- and gas pipelines,” Kiil says.

“In this regard, a flexible pilot plant for testing under such extreme conditions has been built and we are now starting to experiment with various gases.”

The anticorrosive coatings are another way companies can cut expenses, the university says.