Just two days after a Houston pipeline operator was indicted on criminal charges related to a 2015 California oil spill, federal regulators released their final failure investigation report on the incident.

The U.S. Department of Transportation's Pipeline and Hazardous Materials Safety Administration (PHMSA) confirmed that external corrosion was the direct cause of the failure leading to the May 19, 2015, Plains All-American pipeline release in Santa Barbara County, CA.

Moreover, the agency determined Plains’ failure to protect the pipeline from corrosion, in addition to its failure to detect and respond to the pipeline rupture once it occurred, further contributed to the severity of the release, PHMSA said in a statement released on the anniversary of the spill. 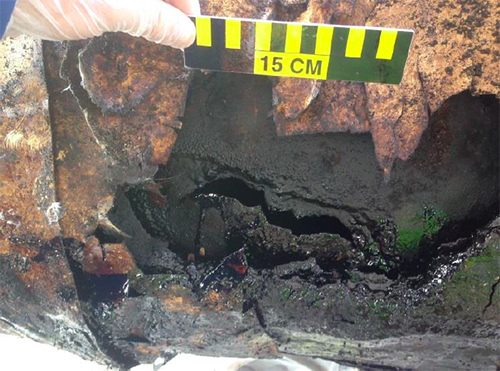 Photos: PHMSA
The PHMSA final report included a photograph of the failed section of Line 901 showing the surrounding insulation and coating.

"PHMSA's investigation reveals that a number of preventable errors led to this incident, and that the company's failures in judgment, including inadequate assessment of the safety of this line and faulty planning made matters worse," said U.S. Transportation Secretary Anthony Foxx.

"Millions of dollars have been spent to repair the substantial damage caused to the environment from this spill,” Foxx added. “It is completely unacceptable, and we will hold the company accountable for its actions."

According to the agency’s 510-page report, the 10.7-mile pipeline running alongside U.S. 101 in California was constructed in the late 1980s, hydrostatically tested in 1990 and went into crude oil service in 1991.

The pipeline was coated with coal tar urethane applied directly to the bare pipe, then covered by foam thermal insulation with an overlying Polyken tape wrap, the report stated.

The rupture occurred in the 2-foot-wide buried, insulated pipeline of Plains Line 901, releasing 140,000 gallons of heavy crude oil, a portion of which entered the Pacific Ocean.

The corroded section of pipe reportedly burst after pumps on the pipeline were shut down and restarted, sending a larger volume of oil through the pipe at higher pressure—a jump to 721 pounds per square inch from the earlier 677 psi.

While no human fatalities or injuries were reported from the failure, there was substantial damage to natural habitats and wildlife, PHMSA noted.

The primary cause of the failure, the agency reported, was progressive external corrosion, which “thinned the pipe wall to a level where it ruptured suddenly and released heavy crude oil.”

The pipeline burst at approximately 56 percent of the maximum operating pressure (MOP), PHMSA stated. It added that even with “abnormal operational events” such as those reported the morning of the release, a rupture should not have happened “if the pipeline’s integrity had been maintained to federal standards.”

Among contributory factors, PHMSA indicated that Plains failed to provide effective protection against external corrosion, adding that the condition of the line’s coating and insulation system “fostered an environment that led to the external corrosion.”

Corrosion is said to have occurred under the pipeline’s coating system, and water was reportedly found in the foam insulation at various excavated areas, providing evidence that the integrity of the coating system had been compromised.

PHMSA noted that the external corrosion was “facilitated by the environment’s wet/dry cycling,” as determined by its third-party metallurgical laboratory.

The agency indicated that the May 19 release was a single event caused by a pipeline wall that was thinning as the result of corrosion.

“There is no evidence that the pipeline leaked before the rupture,” PHMSA wrote. “There was a telltale ‘fish mouth’ (a split due to over-pressurization) at the release site indicating the line failed in a single event.”

The agency noted that an impressed current system, which Plains used on Line 901, is not able to protect an insulated steel pipeline if the coating (tape wrap over insulation) is compromised.

“The external coating in the area of the rupture had allowed moisture to enter the insulation adjacent to the steel pipe,” the report stated. “Corrosion under insulation (CUI) cannot be prevented on insulated lines where the coating system has been compromised.”

Additionally, PHMSA found that historical CP records for the affected line showed Plains was implementing the protection levels appropriate for non-insulated, coated steel pipe, whereas Line 901 is an insulated pipeline.

The agency also claims Plains failed to detect and mitigate the corrosion, in that its in-line inspection (ILI) tool and later data analysis “did not characterize the extent and depth of the external corrosion accurately.”

As part of the investigation, PHMSA brought in an independent ILI expert to review ILI data for the lines, as well as an independent metallurgical expert to review the condition of the pipeline in the area where it failed. The metallurgical expert also oversaw excavation along several areas of Line 901 and 903 to compare defects detected by the ILI analysis to the actual condition of the pipeline upon excavation.

In reviewing the operator's ILI results, including the ILI conducted two weeks prior to the pipeline failure, the agency found instances where the inspection tool did not accurately determine the degree of corrosion occurring in the lines.

The discrepancies between the tool measurement and the actual corrosion were as much as 40 percent in the area where Line 901 failed, it said.

PHMSA's investigation found that the operator failed to properly analyze the ILI tool data and that a different ILI tool type could have provided more accurate information to assess the type of corrosion occurring on Line 901.

According to the report, the site of the failure was within 6 feet of a corrosion anomaly that was exposed and repaired after a 2012 ILI survey. Evidence of corrosion and degraded coating systems was found between the 2012 repair site and the 2015 rupture site. Plains did not excavate the anomaly that failed, PHMSA said.

"This report confirms our preliminary findings on the cause of this incident, and reveals that the operator failed on multiple levels to prevent, detect and respond to this incident,” said PHMSA Administrator Marie Therese Dominguez.

“Now that we have completed our investigation, we will focus on enforcement options, she added. "While we will continue to work with other Federal and State agencies on civil and criminal actions, the bottom line is this pipeline will not be allowed to operate until we are satisfied that all of its safety issues have been appropriately addressed."