A fleet of armed forces helicopters recently got a fresh coat of paint as part of the aviation group’s centennial celebration.

The advanced aerospace military coatings used to recreate the commemorative liveries were manufactured by PPG, the company announced Thursday (May 19). 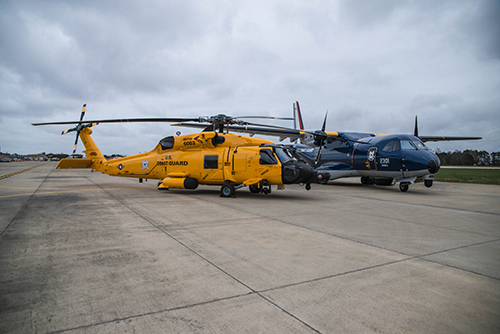 Photos: U.S. Coast Guard
PPG military topcoats and primers have been used to paint rotary- and fixed-wing aircraft commemorating U.S. Coast Guard aviation’s centennial in 2016. Six MH-60 JAYHAWK helicopters have been repainted in 1950s-era yellow, and a dark blue and silver metallic livery flown from 1934 to 1943 has been recreated on two HC-144 Ocean Sentry aircraft.

“PPG has a long, successful history as a coatings supplier for U.S. Coast Guard aircraft, and we salute the aviators for their service in untold numbers of heroic missions,” said Duane Utter, PPG aerospace global segment manager for military coatings and defense products, indicating the company’s pleasure in participating in the historic project.

PPG’s military coatings technical and sales team worked with the engineering and paint manager at the U.S. Coast Guard Aviation Logistics Center, Elizabeth City, NC, to recommend coatings that would provide the desired gloss, durability and ease of application for the commemorative paint jobs.

A high-solids military advanced performance topcoat was recommended for the 13 helicopters, as it is said to provide a buffable high-shine finish with excellent gloss and image reflection, lower weight and long-term durability for color and gloss retention.

A second military topcoat formulation was advised for the airplanes due to its reported ability to achieve a special-effects metallic paint scheme and long-lasting finish.

The PPG topcoats were applied over the company’s high-solids military epoxy primer on all 15 aircraft; a chrome-free primer was also used on the MH-65 helicopters.

“PPG coatings offered the performance needed, and we were awarded the contract,” Utter said, noting that the primers offer the corrosion resistance needed for the tough environment in which the Coast Guard flies, while the topcoats provide resistance to weathering.

The 15 aircraft chosen to receive the historic liveries were selected by Logistics Center personnel for their historical significance.

The most storied aircraft of the group is a restored HH-52A Seaguard helicopter, tail number 1426.

This craft was involved in the rescue of 22 survivors from the burning freighter Mimosa and tanker Burmah Agate that collided Nov. 1, 1979, near Galveston, TX. The Coast Guard describes this event as perhaps the greatest mission in Coast Guard aviation history.

In April, the helicopter became the first Coast Guard aircraft inducted into the Smithsonian’s National Air and Space Museum; it is on display at the museum’s Steven F. Udvar-Hazy Center in Chantilly, VA.

This craft was repainted in 1975 colors with an orange cockpit, rotor tail and banding, and white fuselage and tail.

Two HC-144 Ocean Sentry fixed-wing airplanes have been repainted in a livery based on the Douglas RD-4 Dolphin airplanes the Coast Guard flew from 1934 to 1943.

The planes were painted with a dark blue fuselage, yellow on top of the wings, red and white on the tail, and silver metallic on the belly, underneath the wings, and for the engine cowlings and a stripe on the tail.

The special-effects paint scheme used a military topcoat with a clear gloss coat over the silver for additional luster.

Six MH-60 JAYHAWK helicopters have been repainted to resemble their Coast Guard livery from the 1950s to the 1970s, using a yellow military advanced performance topcoat.

Six MH-65 Dolphin helicopters have been painted in white with an orange stripe to recreate the livery found on H-65 helicopters from the 1980s and 1990s.

The chrome-free primer was applied to the composite body and over the base primer on the metal surfaces; PPG says this will deliver corrosion resistance with a reduction in chrome of nearly 50 percent.

The MH-60 and MH-65 helicopters were repainted at the Elizabeth City logistics center, as was the HH-52A helicopter for the Smithsonian display.

The HC-144 aircraft were repainted at a paint facility in Texas.

Except for the HH-52A, the aircraft are being returned to Coast Guard air service.