The citation, issued by the California Public Utilities Commission May 13, identified 45 safety violations during inspections of Southern California Gas Co. underground natural gas pipelines conducted in April and May 2015.

According to the documentation, the gas company violated state and federal requirements related to external corrosion control monitoring. 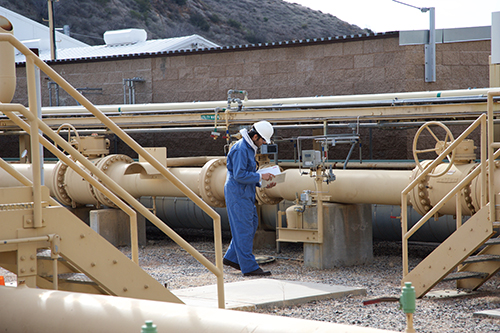 “SoCalGas failed to remediate deficient Cathodic Protection (CP) packages for intervals, in some cases, in excess of three years,” CPUC Safety and Enforcement Division inspectors noted in the citation.

According to the federal Pipeline and Hazardous Materials Safety Administration (PHMSA), prompt remedial actions to correct deficiencies would take place “by the time of the next scheduled monitoring.”

The CPUC inspections discovered the utility company failed to fix 125 CP packages between 2011 and 2015. These packages were found to have been deficient for periods that exceeded SoCalGas’s routine monitoring frequency. That means that they had remained deficient for more than 15 months during the 2015 inspections of the company’s Harbor Corridor and Mid-City LA districts.

Of the 125, 45 CP packages were deficient more than two years. The inspectors deemed the lack of action “excessive,” “unacceptable” and in violation of federal requirements.

“This violation presented unacceptable risk to safe operations prior to corrective action,” the citation read.

SoCalGas has until Monday (May 23) to correct the violations or submit a plan for corrections and pay the fine or appeal the citation.

In a statement to the media, SoCalGas indicated it is actively addressing the issue by putting “system-wide corrective actions” in place and is working “diligently to address all required remediation.”

It added that all but five of the 45 CP packages in question have already been attended to and are “operating normally.”

“The five remaining cathodic protection areas are being actively worked on and are expected to operate normally within the next few months,” the company noted.

According to SoCalGas, it maintains more than 20,000 corrosion protection systems, but adds that they are just one of several tools it uses to monitor its pipelines. Leak surveys and physical inspections were noted as others.

"As the Commission noted in the citation, the violation was not willful and SoCalGas has taken responsibility at the highest levels to address the issue by actively implementing system-wide corrective actions.”

According to the Los Angeles Daily News, the state’s citation program was launched in late 2011, 16 months after the September 2010 explosion of a 30-inch Pacific Gas & Electric gas transmission line in San Bruno. The incident killed eight people, injured 58, destroyed 38 homes, and damaged another 70.

As reported earlier, the National Transportation Safety Board, which undertook the investigation, laid the proximate cause to a cracked longitudinal weld in the ruptured pipe. Investigators also reported numerous other defective welds in the pipe and varying thicknesses in the pipe walls.

It also uncovered widespread recordkeeping irregularities, and noted that the company had failed to inspect the 50-year-old San Bruno line, despite previous gas surges, and had ignored reports of gas odors in the days before the blast.

The inspections of SoCalGas locations took place just months before another highly publicized incident in the state.

A gas well blew out at SoCalGas’s own Aliso Canyon Natural Gas Storage Facility in the San Fernando Valley near Porter Ranch. The rupture, discovered in October 2015, reportedly released more than 5 billion cubic feet of natural gas and forced more than 2,000 families to be relocated from the area.

In fact, SoCalGas and Los Angeles County only ended the temporary relocation Monday (May 16), allowing relocated residents to return to their homes.

The current SoCalGas citiation is not associated with the Aliso Canyon gas leak, according to CPUC spokesman Christopher Chow.

It took 119 days to stop the release after its discovery; the leaking Aliso Canyon well was permanently sealed in February.