Concrete formulation and coating specifications play a role in many of the projects being honored by the American Institute of Architects for their sustainable and ecological design.

The AIA and its Committee on the Environment (COTE) present the COTE Top Ten Awards annually; the awards recognize “design projects that protect and enhance the environment,” AIA says. The awards will be handed out at this week’s 2016 AIA Convention, in Philadelphia.

Nine of the 10 buildings are in the United States, the lone exception being the Biosciences Research Building, in Galway, Ireland. Designed by Payette and Reddy Architecture + Urbanism, it was completed in October of 2013 at a cost of $36.7 million. 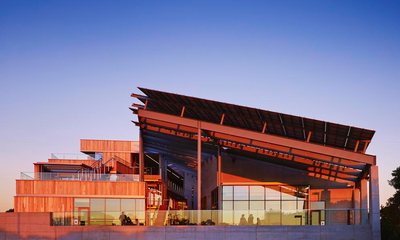 The project team, under general contractor McCarthy Building Companies (San Diego), used an 8,000 psi concrete formulation to reduce the amount of total concrete needed, and used a 30 percent fly ash formula, which they call “one of the most sustainable design mixes ever used in the U.S. at the time of construction.”

The architects chose to leave the Spanish cedar wood portions of the building unfinished. The project was completed in 2013.

Another of the winning projects, the Rene Cazenave Apartments in San Francisco, provides housing for residents who previously experienced chronic homelessness. Designed by Leddy Maytum Stacy Architects, the new construction, built on a former parking lot, shows as much concern for aesthetics and livability as sustainability.

Many of the residents have health problems, the architects explain, which led them to specify interior finishes and other materials with low VOC levels, which they call an “essential’ decision.