Nearly one year to the day from the pipeline breach that spilled 140,000 gallons of crude oil on the California coast, the Houston-based pipeline operator has been indicted on 46 criminal counts by a Santa Barbara County grand jury.

The indictment, returned Monday (May 16), accuses Plains All American Pipeline LP of four felonies, including knowingly discharging a pollutant into state waters, according to a May 17 Reuters report.

The other 42 charges are said to be misdemeanors related to wildlife losses.

The company faces penalties up to $2.8 million if convicted of all charges, prosecutors told the Associated Press.

One Plains employee, James Buchanan, 41, an environmental and regulatory compliance specialist, was charged with three misdemeanor counts, along with the company, for failing to report the spill to state emergency officials in a timely manner.

Buchanan faces up to three years in prison if convicted, according to prosecutors.

The court indictment records remain sealed at this time. Buchanan and the company are scheduled for arraignment June 2.

The Spill and Its Aftermath

The U.S. Department of Transportation’s Pipeline and Hazardous Materials Safety Administration (PHMSA) Office of Pipeline Safety has since identified external corrosion as the cause of the pipeline failure in its preliminary findings.

The PHMSA report explained that the corroded section of pipe burst after pumps on the pipeline were shut down and restarted, sending a larger volume of oil through the pipe at higher pressure—a jump to 721 pounds per square inch from the earlier 677 psi.

The spill sent crude oil into Refugio State Beach and a plume of oil nine miles into the Pacific Ocean, according to the AP; tar balls were found to have washed up on Los Angeles County beaches more than 100 miles away.

Having occurred at the edge of a national marine sanctuary and state-designated underwater preserve, more than 220 birds and almost 140 marine mammals, including pelicans, Pacific loons and sea lions, were killed by the spill.

Many landowners, fishermen and business owners affected in the aftermath are also reportedly seeking retribution.

"The carelessness of Plains All American harmed hundreds of species and marine life off Refugio Beach," California Attorney General Kamala Harris said in a statement.

"This conduct is criminal, and today's charges serve as a powerful reminder of the consequences that flow from jeopardizing the well-being of our ecosystems and public health." 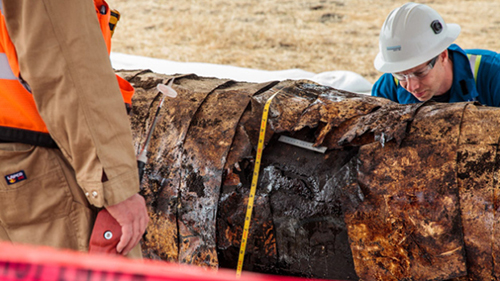 Br
Plains All American Pipeline LP and one of its employees face 46 counts of state law violations in the May 19, 2015, oil spill that initially went undetected when a severely corroded 2-foot-wide pipe ruptured.

She added that the indictment sends the message that "any company that is operating in our state and transporting crude oil and doing it in a way that is irresponsible and in violation of the law will be held accountable."

Plains announced that it was “deeply disappointed by the decision of the California Attorney General and Santa Barbara District Attorney to pursue criminal charges against Plains and one of its employees in connection with the 2015 accident,” in a May 17 statement.

The company specified that the 46 counts include 10 relate to the release of crude oil or reporting of the release and 36 relate to wildlife “alleged to have been taken as a result of the accidental release.”

The company finds the criminal prosecution unwarranted, noting it believes that neither itself nor its employees engaged in criminal behavior related to the spill and that it “sincerely regrets the accidental Line 901 release and the resulting impact on the community, the environment and wildlife.”

Plains maintains that it has acted appropriately since the spill in its efforts to clean up the beaches and affected areas “quickly and effectively,” compensating those affected by the spill, and cooperating with federal and other responding agencies following the event.

Moreover, the company claims it is proactively taking steps to prevent future accidents and intends to share its findings with other pipeline operators to improve practices industry-wide.

“We will vigorously defend ourselves against these charges and are confident we will demonstrate that the charges have no merit and represent an inappropriate attempt to criminalize an unfortunate accident,” the company asserted.

The Plains pipeline failure is reportedly the largest coastal oil spill in the U.S. since the 2010 BP Deepwater Horizon explosion in the Gulf of Mexico, which killed 11 rig workers and spewed millions of gallons of crude, according to the AP.

The Plains spill is expected to cost the company $269 million, not counting lost revenue, per the company's annual report, the news agency reports.

The pipeline remains out of service while the company makes repairs and federal officials determine whether any additional actions are required. This closure also idles seven offshore platforms, including three owned by Exxon Mobil, because the Plains pipeline delivered their crude to refineries.

Additionally, some of the company’s own shareholders are filing a suit against it, claiming investors who purchased shares were fed false and misleading statements about the integrity of the pipelines.