British architects say that school buildings in the U.K. are poorly built and maintained, and it's affecting how teachers teach and how students learn, according to a new report.

The Royal Institute of British Architects, which represents 40,000 members, issued “Better Spaces for Learning” on May 11. The 60-page report excoriates the state of British school buildings and calls for the government to reform the way schools are designed and built. 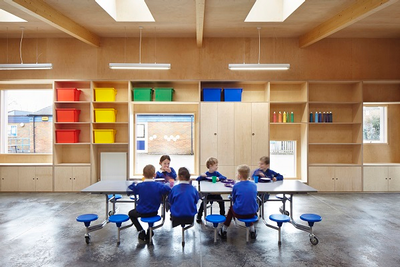 The report details polling data that shows that teachers overwhelmingly think that the design of their schools and classrooms is important to their work, and says that one in five teachers polled have considered quitting their job because of the condition of their school buildings.

RIBA polled 501 teachers in England: 205 from primary schools, 270 from secondary schools and 26 from special-education schools. The polling information shows that teachers value spacious classrooms and hallways, noting that the latter seem to reduce bullying and unsafe behavior.

According to the RIBA poll, half of U.K. teachers think their school is too small, and a quarter think their building is in poor condition.

Moreover, the report cites the latest government survey that found only 5 percent of 59,967 school buildings studied to be performing as intended and operating efficiently.

Capacity and maintenance issues have plagued the country's learning institutions, the report says, noting that changes to the government's rebuilding programs have resulted in multi-year delays, "unnecessary expenses for the patching up of dilapidated buildings and renting temporary classrooms resulting in worsening learning and teaching conditions."

RIBA argues that the British government’s current program for building schools is too rigid, leaving too little room for the flexibility that’s necessary in building schools to fit a particular community’s needs.

“The fundamental shift from a locally controlled education system to a national system that grants greater independence to schools means that there is a danger that central control drowns out local circumstances in the debate about school environments,” RIBA argues in the report.

The allocation of funds for schools in the U.K. is overseen by the government’s Education Funding Agency.

The RIBA report argues in favor of prioritizing good design.

“Good design is one of the few tools that is demonstrably capable of achieving the 'holy grail' of public policy: better outcomes at a lower cost,” the report states.

RIBA studied educational outcomes and spending at schools throughout the U.K., finding a positive correlation between what it considered to be “good design” and student engagement and well-being, staff productivity, and cost reduction.

In the report, RIBA suggests the EFA work to develop and share more and better information when it comes to the design and construction of school buildings.

The group also calls on the government to be more flexible about its standards for school buildings, noting that one size does not fit all when it comes to school construction. And it calls for a change in the government’s approach to building management equipment, which RIBA calls generally “over-engineered” and costly.

“How can we expect our children to compete with the world’s best when too many of our school buildings are substandard?” said RIBA President Jane Duncan. “Educational improvements resulting from the current programme of school building are not reaching the basic standards that British taxpayers and our economy expects.”

"Schools are no different to other parts of the construction sector: to deliver value for money they need long-term policy stability," the report states.