The European Space Agency released a photo last week of a chip in one of the most famous windows in the universe—and said the blame may lie with a flake of paint.

The picture shows a small chip, 7 millimeters in diameter, in a pane of glass in Cupola, the primary observation area aboard the International Space Station. The ESA said the photo was taken last month by Tim Peake, a British astronaut who’s been aboard the ISS since December. 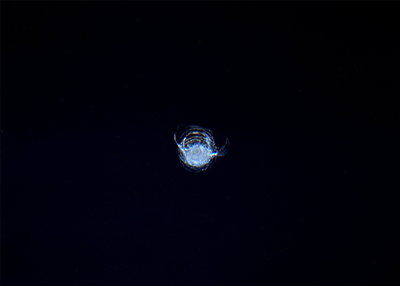 Images: ESA
The picture shows a small chip, 7 millimeters in diameter, in a pane of glass in Cupola.

According to the ESA, the object that made the chip was “possibly a paint flake or a small metal fragment no bigger than a few thousandths of a millimeter across.” The agency noted that this particular strike posed no safety hazards, but used the incident to point out the danger of larger pieces of space debris.

“Anything above 1 centimeter could penetrate the shields of the Station’s crew modules, and anything larger than 10 centimeters could shatter a satellite or spacecraft into pieces,” ESA wrote on its website.

Speed plays a factor in how extreme these collisions are, of course. ESA estimates that an average collision in low-Earth orbit takes place at about 10 kilometers per second—more than 22,000 mph.

““I am often asked if the International Space Station is hit by space debris. Yes—this is the chip in one of our Cupola windows, glad it is quadruple glazed!” astronaut Peake said.

Cupola was built in Italy for the American space agency NASA. The windows are made of fused silica and borosilicate glass, according to the ESA. Space Station crew members have sent home photos taken from Cupola since its installation on the ISS in 2010.

According to Boeing, whose engineers designed Cupola’s windows, each window assembly comprises three panes of glass, including an outer pane designed to take impacts from debris. The windows are also covered with coatings to prevent reflection and allow for the views we’ve grown accustomed to in ISS photography, and to filter UV and infrared light.

Last year, ISS had a near-miss with a piece of an old Russian weather satellite. And it’s little surprise there are regular encounters with space junk: According to the ESA’s recent publication on space debris, there are 29,000 human-made objects larger than 10 centimeters in orbit right now, both dead and in use.

Space agencies are working to both mitigate the space debris danger and to monitor objects in orbit so that craft can guard against them.

The International Space Station is a cooperative program of NASA, the ESA, and the space programs of Russia, Japan and Canada. There are currently six astronauts—Peake, two Americans and three Russians—aboard the craft, the largest ever sent into space.