Scientists at Seton Hall University say they’ve come up with a new and more effective way to fight biofouling through coatings—and the technology they’ve developed may help fight cancer and environmental degradation as well.

Professor Sergiu M. Gorun, director of the university’s Center for Functional Materials, has been working with graduate students Karpagavalli Ramji and James Sullivan to refine the formula for a coating additive that actively fights against organic and biological particles, thus stopping the corrosion they bring with them. 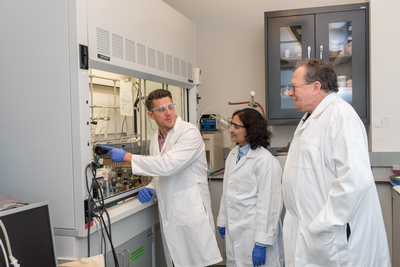 The three researchers obtained a patent for their creation earlier this year, and according to the university, this month they’ll receive the 2016 John J. LaGrosa Award from the New Jersey Water Environment Association for their work.

The research was done with support from the U.S. Air Force.

Gorun and his team built their research on already-existing technology involving substances known as photosensitizers—molecules that use light to change other molecules around them. The particular molecules they worked with use light and oxygen from the environment to produce radicals that then destroy organic compounds—including organisms like algae—in their presence.

“All radicals have the ability to degrade the C—H bonds of organic compounds, mildew, mold, algae, grease, etc., thus imparting cleaning and self-cleaning properties to the oxide,” the team writes in its patent.

Previous research, the scientists say, had shown that the method worked, but only fleetingly: The molecules would only perform the pollution-fighting act once, then would cease to work. But, when using fluorinated phthalocyanine, they found the molecules worked consistently, over and over. (The scientists describe the substance as “virtually immortal” under lab conditions.)

The coating the phthalocyanine is incorporated into keeps out water but takes in oxygen, which is crucial to the coating’s performance.

The most obvious potential application for Gorun’s discovery is in marine coatings, where biological organisms and other organic compounds can lead to corrosion. But the substance’s effects could be more far-reaching.

Photosensitizers are already in use in the fight against cancer, in a process known as photodynamic therapy. In it, the substances are injected into the bloodstream of cancer patients, and attack cancer cells in much the same way the fluorinated phthalates attack other organic compounds.

According to Seton Hall, Gorun and his team have worked on a method of using the fluorinated phthalates coupled with “finder molecules” to better seek out and attack cancer cells. Right now, according to the National Cancer Institute, photodynamic therapy generally involves photosensitizers that go throughout the body, and simply continue to work on cancer cells longer than other cells in the body.

Gorun also sees a use for the substance in environmental cleanup efforts. Waters polluted by organic substances could potentially be treated with the fluorinated phthalates, which, with help from light and water, could destroy the pollutants.

“In all these applications of our research, what we are doing, simply, is taking the power of light and combining it with oxygen and the brilliance of our students to do something useful,” Gorun said. “As the director of Seton Hall’s Center for Functional Materials, it is the essence of what we strive for: the practical application of research and researchers to solve real problems.”