New York’s Tappan Zee Bridge replacement project, billed as the largest bridge and highway infrastructure project in North America, is also reported to be one of the safest construction ventures in the country.

According to Tappan Zee Constructors, the design-build consortium responsible for the new bridge, the total recordable incident rate is 0.63 percent per 100 employees—which makes it more than five times lower than the national average of 3.5 percent for a construction project of its size, The Journal News reported Monday (May 2). 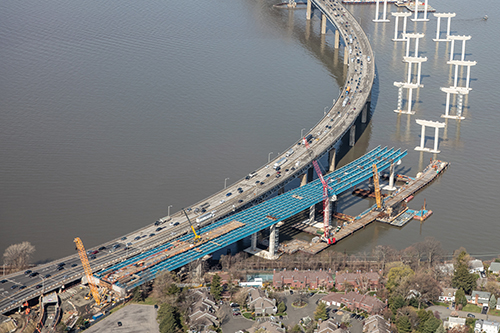 Photos: New York State Thruway Authority
Tappan Zee Constructors reports that its incident rate on the New NY Bridge project is more than five times lower than the national average of 3.5 percent for a construction project of its size.

The nearly $4 billion New NY Bridge will be a 3.1-mile twin span cable-stayed bridge with angled main span towers. It is the single largest bridge construction project in New York’s history, according to the TZC website, and, because it crosses the widest part of the Hudson River, it is also one of the most challenging.

"To have … basically one incident every three months is amazing, considering the type of work we do out there and the challenges we are facing," he added.

A Culture of Safety

“Our industry is one of the most dangerous in America," Towle told the area paper, adding that his father and brother had been seriously injured on construction jobs. "One-fifth of workplace fatalities happen in the construction industry.”

TZC, however, indicates it places an emphasis on safety initiatives, keeping upper management involved in the program. It has conducted more than 1,000 safety training seminars in additional to providing on-site medical care and drug and alcohol screenings.

If there is anything a worker is unaware of when coming on site, training is available to ensure everyone’s safety, a site manager told ABC.

TZC’s announcement coincides with the construction industry’s National Safety Week (May 2-6), a program developed to inspire everyone in the industry to be leaders in safety, according to the event site.

Safety Week is a joint effort between more than 40 national and global construction firms comprising the Construction Industry Safety Initiative (CISI) and the Incident and Injury Free CEO (IIF) Forum.

CISI is a group of 12 major contractors who come together twice a year for a two-day meeting to discuss industry safety. CISI seeks to influence those within their group and others to work safely and elevate safety awareness to a new level in the United States.

IIF, made up of CEOs from major U.S. engineering and construction firms, also meets twice a year with the goal of sustaining incident and injury-free records while also establishing the groundwork for a potential industry-wide safety transformation.

For Safety Week 2016 the partners are working to:

At an event kicking off Safety Week 2016, CISI executive committee member and Skanska USA Civil CEO Michael Cobelli lauded the New NY Bridge project’s safety record, saying it was "not the norm" for the industry.

"We need to remain vigilant and we need to remain focused," Cobelli said. "It’s a never-ending quest for zero. And by zero, I mean zero incidences, not zero people getting hurt. Zero near misses. Zero reportables. Zero lost times.”

The project is slated for completion in 2018.