Bearing Maker Gets 35 Months for Fraud

A Chicago manufacturer who had pleaded guilty to making false statements concerning highway projects and to aggravated identity theft will spend 35 months in behind bars, according to the U.S. Department of Justice.

Last year, Joel De La Torre, 34, admitted in the Raleigh, NC, U.S. District Court that, through a business called Delgado’s Elastomeric Bearings Corporation, he had forged the name of an unwitting teenager to order and approve defective bridge parts for state projects.

The defendant was also ordered to serve a three-year term of supervised release and to pay $21,509 in restitution, according to the Office of the Inspector General. 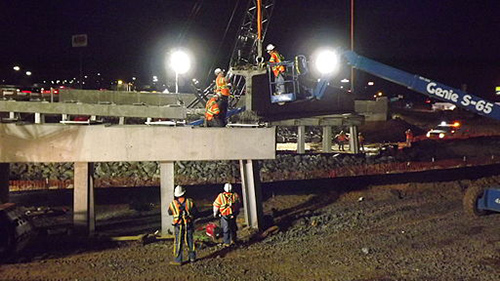 By NCDOTcommunications / CC BY 2.0 via Wikimedia Commons
Joel De La Torre has been sentenced to 35 months in prison for his role in a scheme that delivered defective elastomeric bearings for use on bridges in North Carolina.

He had faced a penalty of up to seven years in prison.

A number listed for the company online has been disconnected, and the company does not have a website.

The case dates to October 2011, when a federal highway contractor discovered a defect in a group of elastomeric bearings shipped for use on bridges in North Carolina. The defect exposed the steel plates, subjecting them to the elements and creating the potential for deterioration.

At that time, a North Carolina Department of Transportation investigation uncovered “systematic problems” with elastomeric bridge bearings that had been sold to numerous state highway contractors and, in some instances, installed on bridge projects.

In total, 1,270 of the shipped bearings were found to be nonconforming and defective. The bearings were shipped for use on bridges in 25 different North Carolina highway projects between May 2009 and October 2011, the agency said.

NCDOT later discovered that many of the bridge bearings had come from Delgado’s, based in Chicago.

After the U.S. DOT launched a criminal investigation into the creation and shipment of the defective bridge bearings, the agency found a falsified North Carolina application to supply the bridge bearings to local contractors.

The name of a teenager with no knowledge of how to manufacture bridge bearings was fraudulently used on the application, federal prosecutors said. The teen was also named as Delgado’s vice president, while the teenager had no knowledge of this title.

This same name and title were said to have been used on all certificates sent to North Carolina highway contractors certifying the conformity of the bearings with applicable state and federal regulations.

Ultimately, the investigation revealed that the defendant, De La Torre, had forged the name of the teenager on those documents. It has not been made clear why De La Torre appropriated the teenager's name for the deal or how he singled out the teen.

According to officials, costs associated with the replacement of the bearings are expected to exceed $5 million because of the difficulty in removing the bearings from beneath existing bridge structures, engineering costs and traffic control.

These costs have not yet been incurred. Federal and state agencies reported that there is no immediate threat to safety due to the faulty bearings, which will be monitored and replaced over time.

The maximum punishment for making false statements concerning highway projects, conspiracy to make false statements, and perjury is up to five years in prison for each count, a $250,000 fine for each count, and three years of supervised release. Aggravated identity theft carries a penalty of not less than, nor more than two years imprisonment consecutive to any other sentence imposed, a $250,000 fine and one year of supervised release.

The investigation of this case was conducted by the U.S. DOT, OIG, with the assistance of the Federal Bureau of Investigation. Assistant United States Attorney William M. Gilmore represented the United States.