A  jury awarded $17.72 million to the family of the worker who drowned during bridge construction on the Baylor University campus in 2014.

According to the Waco Tribune-Herald, it took jurors just six hours over two days of deliberations to come to the decision that Austin Bridge & Road, the general contractor hired to build the bridge, was 100 percent responsible for Jose Dario Suarez’s death. 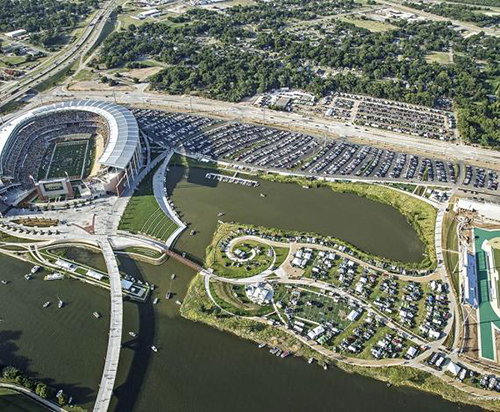 Flintco LLC
A jury awarded $17.72 million dollars to the family of Jose Dario Suarez, who drowned in 2014 while working on a new pedestrian bridge on the Baylor University campus.

The accident that resulted in the death of Suarez, 55, occurred during work on a $9.1 million pedestrian bridge that is part of Baylor's new $260 million McLane Football Stadium. The bridge crosses over the Brazos River, linking the campus and stadium.

The total award included $5 million in damages for Suarez’s “pre-death pain and suffering as he drowned”; $1 million for each of his three children; approximately  $8 million for his wife; and $2 million in punitive damages, the paper noted.

The lawsuit, in which attorney Vuk Vujasinovic represented Suarez’s wife, two daughters, son and mother, had asked for $27 million in damages.

“I hope this verdict will send a message to all companies, not only construction companies, to properly train their workers and supervisors and not prioritize speed and profits over safety of workers and people,” said Vujasinovic.

The trial, which took place in the 151st State District Court in Houston, lasted three weeks.

Multiple Defendants, One to Blame

As reported earlier, Suarez’s family sought damages from the nine companies involved in building the Sheila and Walter Umphrey Pedestrian Bridge or connected to the equipment used to build it.

Although the university had been named as a defendant in the original statement as well, 151st State District Judge Mike Engelhart dismissed the school from the suit in June.

The suit claimed that the accident was caused by "misuse of multiple components of marine equipment," including a tugboat, the Flexifloat barge, the Genie lift, chains that were meant to secure the lift to the barge, life-saving equipment, and other items.

Additionally, after the man-lift to which Suarez was tethered fell from a floating dock and into the river in near-freezing temperatures, it was reported that no one on the site stopped work to attempt to rescue Suarez, allegedly because they were under pressure to keep up with the construction schedule.

The steel erector subcontractor for which Suarez worked, Derr and Isbell Construction LLC, was fined $7,000 by the Occupational Health and Safety Administration for failing to provide a safe work environment.

“On or about January 28, 2014, and at times prior thereto, employees worked from a Genie S-60 Boom lift on a floating barge on the Brazos River while the lift was not secured to the barge,” the citation said. The company paid $5,000 in a formal settlement.

However, during jury summations Wednesday (April 13), Vujasinovic asked the jury to place 100 percent of the blame on Austin Bridge & Road and to find other defendants not liable, which is what they did, the Herald-Tribune reported.

“Lots of times people wonder why there are so many companies named as defendants in these type of cases,” Vujasinovic told the local paper.

“As it turned out, everybody was pointing the finger at each other and sometimes it takes a trial like this to expose the bad actor.”