Federal workplace safety authorities are investigating the death of a 25-year-old painter who fell five stories at an apartment project last month in Springfield, MO.

Meanwhile, the painter’s employer, through its attorney, has blamed the paint supplier Sherwin-Williams for the worker’s death. Spokesman for Sherwin-Williams Mike Conway told D+D News that the company could not comment on the matter as it was the subject of an ongoing federal investigation.

Authorities say Joshua Halphin, an employee of RF Barratt Enterprises LLC, of Springfield, had been helping to unload paint from a forklift on a fifth floor balcony when he fell 50 feet to the ground around noon on March 24. 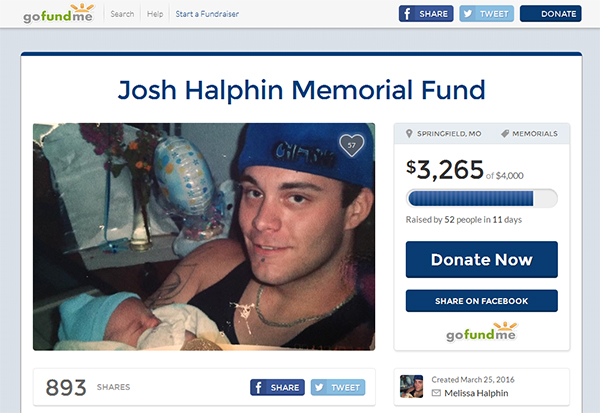 Screenshot via Gofundme
Joshua Halphin, 25, of Springfield, MO, died March 24 when he fell 50 feet from a fifth floor balcony at an apartment complex under construction.

RF Barratt had been hired to paint the Aspen Heights apartment complex, which was under construction. Aspen Construction Company was managing the project.

New on The Job

Halphin had worked for the painting subcontractor for just four months when the tragedy occurred.

He has been described by family members as “a hard worker” and “great with children,” according to a local ABC affiliate, KSPR 33.

A Go Fund Me page seeking donations to help pay for Halphin’s funeral expenses was created by his sister, Melissa. As of Wednesday (April 6), $3,265 of the $4,000 goal had been raised.

Rhonda Burke, a spokesperson for the U.S. Occupational Safety and Health Administration, says the agency has opened an investigation into Halphin’s death, which could take up to six months to complete.

In its statement on the investigation, OSHA's Assistant Regional Administrator Brian Drake said that "this incident could have been prevented."

"Many workers die on the job when just a few simple steps could have saved their life. Our thoughts and prayers go out to the family and friends of the worker."

Falls remain the leading cause of death in the construction industry.

OSHA’s database indicates RF Barratt does not have a record of past safety citations.

A Springfield Police report provided to D+D News indicated that Halphin and two other employees, including the victim's brother-in-law, had been instructed to move several 5-gallon buckets of white paint to the fifth floor by hand.

However, the police noted that instead, a forklift was used to raise the buckets, stacked on top of a pallet, to the balcony. A supervisor reportedly told police he was unsure why the paint was put onto the lift.

Police noted the absence of railing or safety equipment on the balcony.

Further, a witness reportedly told police he believed the workers may have unloaded too much paint from one side of the pallet causing it to tilt and break.

Halphin was said to have had at least one foot on the pallet when it shifted, authorities noted. Witnesses said they heard a loud noise and found Halphin unresponsive on the ground, police said.

In a statement reproduced in its entirety here, RF Barratt’s attorney Mark Thornhill of Kansas City, MO, recounts the incident, according to the contractor, and blames the paint supplier.

“Halphin and the other painters were new to the job and they did not have safety training for working at heights,” the statement said.

The attorney said at the time of the incident, Halphin was being directed by an employee of Sherwin-Williams, who had agreed to deliver the paint buckets when and where the painters needed them using an enclosed stairwell.

“On the day of the accident, Sherwin-Williams arrived with paint but asked RF Barratt if some of its employees could help with the paint delivery,” the statement said.

The painters reported to a Sherwin-Williams employee who was said to have “borrowed a forklift and driver” to hoist dozens of 60-pound buckets to the location specified, according to the attorney’s statement. The buckets had been placed on an unsecured wooden pallet on placed on the forklift, he said.

“Halphin was unloading paint from the plywood container when it shifted,” sending the materials and Halphin to the ground below, the statement said.

RF Barratt’s attorney did not respond to a request for more information.

Editor's Note: This article was one of the most popular articles from 2016 and ran in our Readers' Choice issue on Dec. 27. For an update on this story, see Supplier Cited in Painter Death.