The confirmed presence of lead paint in a Wisconsin shipyard has halted all work on one vessel while removal of the source is underway.

Fraser Shipyards, located in Superior, became the subject of an Occupational Safety and Health Administration hazardous materials investigation in February after a complaint had been filed with the agency, the Superior Telegram reported Thursday (March 31). 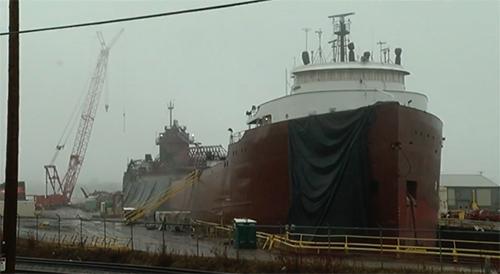 Images:
The company had immediately notified employees and halted all work on the affected areas Tuesday (March 29) upon receiving OSHA’s test results regarding the presence of lead paint.

Fraser President James Farkas indicated the company had immediately notified employees and halted all work on the affected areas Tuesday (March 29) upon receiving OSHA’s test results regarding the presence of lead paint. It also contracted a remediation organization to remove lead paint in the areas that will be disturbed.

Additionally, the shipyard was providing free lead level screenings for all team members through a local health system.

“Fraser takes the health and safety of our team members very seriously,” Farkas said in an email to the local paper. “Our team is committed to work to ensure a safe and hazard free work place.”

Founded in 1890, Fraser Shipyards is the last major, independent shipyard on the American side of the Great Lakes, according to its website. The facility offers full shipyard services for steam or oil-fired, welded or riveted vessels.

Although the shipyard did not disclose information on its employee’s blood test levels, some employees shared their results with WDIO, the local ABC affiliate.

These employees had gone to the emergency room for testing because they weren’t feeling well, they said. One reported a lead level of 46 micrograms/dL and another of 42 micrograms/dL, the news station said.

While the Center for Disease Control considers anything above 10 to be an elevated level, OSHA does not require workers in the construction industry to be removed from lead exposure until levels reach 50 micrograms/dL or higher, the station noted, adding that a worker may return to work with a lead level below 40 micrograms/dL.

With blood test results being returned to employees and remediation underway, Fraser expects crews will be able to return to work on the project within several days.

The OSHA investigation into the presence of potentially hazardous materials was opened on Feb. 10. The area director in Eau Claire, Mark Hysell, would not tell news sources what or who prompted the investigation although the agency's record shows it to be a complaint.

Workers told the local ABC affiliate that the paint in question is on the interior of the Herbert C. Jackson, the target of a major re-powering project they performed during the winter. Representatives from Boilermakers Local 647, one of the unions many at the shipyard belong to, confirmed that it is not unusual to encounter lead paint in their line of work.

In addition to lead, the investigation is also looking at levels of chrome 6, which can be generated during welding on stainless steel or metal coated with chromate paint, the Telegram noted.

The union indicated that crews do wear protective masks while performing their work.

The company has not yet responded to a PaintSquare News request for comment.