For the first time, maps showing the potential for earthquakes as a result of human activity, not just natural movements, have been released by the scientific agency responsible for studying the U.S. landscape, its natural resources and the natural hazards that threaten it.

The United States Geological Survey is the only federal agency with responsibility for recording and reporting earthquake activity nationwide and assessing seismic hazard.

Its hazard assessments are incorporated into building codes that influence a trillion dollars in new construction annually and improve the nation’s resilience to earthquake disasters, the agency reported.

Specifically, USGS seismic risk maps are used by engineering and design groups when determining construction specifications for buildings and other structures, as well as by engineers when evaluating earthquake safety of bridges, pipelines and other important structures. 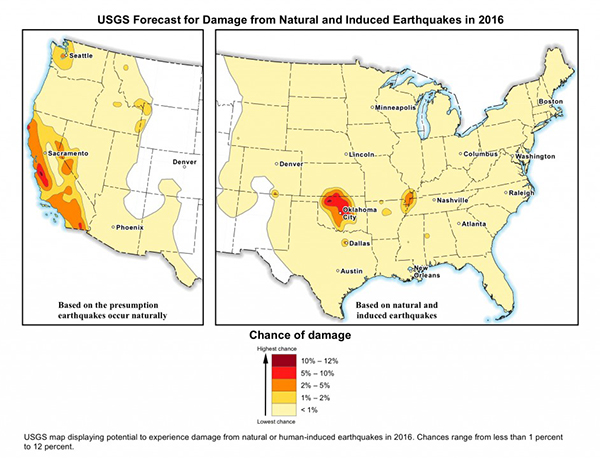 United States Geological Survey
According to the new USGS report, in some areas of the central and eastern United States, the chance of damage from all types of earthquakes is similar to that of natural earthquakes in high-hazard areas of California.

In the latest report, wastewater disposal from oil and gas production into deep underground wells has been identified as the primary human activity triggering “induced earthquakes” in the central and eastern U.S. (CEUS), the USGS announced Monday (March 28).

In addition to including human-induced quakes for the first time, this is also the first one-year outlook USGS has issued for the nation’s earthquake hazards; it supplements existing USGS assessments that provide a 50-year forecast.

The USGS National Seismic Hazard Map uses a 50-year forecast because that is the average lifetime of a building, and such information is essential to engineering design and the development of building codes, it noted.

Building code committees are still determining whether it is appropriate to treat induced earthquakes in building code revisions, in part because induced seismicity can increase and decrease in short timeframes compared to the years it takes for building codes to be updated, reviewed and adopted.

The new hazard model estimates where, how often and how strongly earthquake “ground shaking” could occur in the U.S. during calendar year 2016.

“By including human-induced events, our assessment of earthquake hazards has significantly increased in parts of the U.S.,” said Mark Petersen, chief of the USGS National Seismic Hazard Mapping Project.

“This research also shows that much more of the nation faces a significant chance of having damaging earthquakes over the next year, whether natural or human-induced.”

The CEUS region has experienced the most significant increase in seismic activity from induced earthquakes, USGS noted, moving from an average of 24 3.0-magnitude or larger quakes in the 1973 to 2008 period to a peak of 1,010 earthquakes in 2015. There have already been 226 earthquakes of magnitude 3.0 and larger in the central U.S. region to date, it added.

According to the data, about 7 million people live and work in areas of the CEUS that pose a threat for “damaging shaking” from induced seismicity.

In fact, USGS reports, in some areas of the CEUS the chance of damage from all types of earthquakes is similar to that of natural earthquakes in high-hazard areas of California.

Six states were identified as being threatened by the “most significant hazards” from induced seismicity: Oklahoma, Kansas, Texas, Colorado, New Mexico and Arkansas.

Oklahoma and Texas have the largest populations exposed to induced earthquakes, USGS noted.

Coincidentally, two earthquakes, 4.1 and 4.2 in magnitude, were reported to have struck Crescent, OK, Tuesday (March 29), CBS This Morning reported.

To date, the largest earthquake located near several active injection wells was a magnitude 5.6 in 2011 near Prague, OK, USGS noted.

Wastewater disposal is thought to be the primary reason for the recent increase in earthquakes in the CEUS, the USGS stated.

When the wastewater, a byproduct of oil exploration activities, is injected into the ground, it essentially lubricates fault lines, physics professor Dr. Michio Kaku told CBS This Morning Tuesday (March 29), enabling them to move more freely. The wastewater can also expand existing fault lines by over-pressuring them, he added.

While most injection wells are not associated with earthquakes, some other wells have been implicated in published scientific studies, and many states are now regulating wastewater injection in order to limit earthquake hazards, USGS said.

Regulators in Oklahoma, for example, have ordered many disposal wells to curb operations because of this link between earthquakes and the injection of this water byproduct into underground wells, Reuters reported.

"The good news is that we are already seeing a very positive response to those actions in the form of reduced seismic activity in the central and north central areas of Oklahoma," the Oklahoma Oil & Gas Association said in a statement.

Saltwater injections into disposal wells is down by roughly half from a peak of 1.8 million barrels per day in 2014, the Oklahoma Geological Survey said, with half the wells shutting due to low oil prices.

Many questions have been raised about hydraulic fracturing, or “fracking,” USGS added, but its studies suggest that this process is only rarely the cause of felt earthquakes.