Sherwin-Williams to Buy Valspar for $11B

The Sherwin-Williams Company has announced it will acquire competitor paint and coatings maker Valspar in an all-cash deal valued at approximately $11.3 billion.

The proposed deal—the largest in Sherwin-Williams' 150-year history—was jointly announced Sunday (March 20). It is subject to regulatory approvals as well as Valspar shareholder confirmation. The boards of directors of both companies have unanimously approved the deal.

The companies anticipate a close by the end of the first quarter next year. 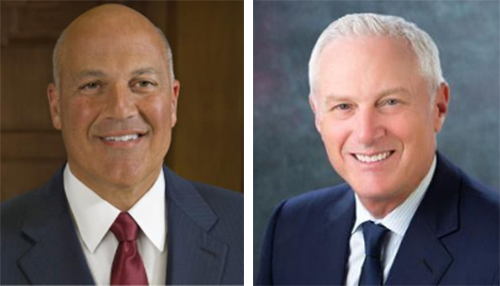 Images: Sherwin-Williams
(Left) John G. Morikis, president and CEO of Sherwin-Williams and Gary E. Hendrickson, chairman and CEO of Valspar, referred to the deal as a “transformational transaction” and “a perfect fit” in a conference call Monday (March 21) morning.

Sherwin-Williams reports that the combined company would have sales of approximately $15.6 billion, adjusted earnings of $2.8 billion, with approximately 58,000 employees. The resulting company would be the top paint and coatings producer in the world, surpassing PPG Industries Inc. and AkzoNobel NV.

Leaders of the two companies referred to the deal as a “transformational transaction” and “a perfect fit” in a conference call Monday (March 21) morning.

The acquisition would increase Sherwin-Williams’ global footprint in Asia-Pacific and Europe, the Middle East and Africa (EMEA) and add new capabilities in packaging and coil segments, said Sherwin-Williams’ President and CEO John G. Morikis. Morikis stepped into the CEO role in January.

“Customers of both companies will benefit from our increased product range, enhanced technology and innovation capabilities, and the transaction's clearly defined cost synergies,” he said.

“We believe that Sherwin-Williams is the right partner to utilize our array of brands and create a premier global coatings company,” Hendrickson said.

Both Sherwin-Williams and Valspar believe that the transaction will receive all necessary regulatory clearances. However, under the terms of the agreement, Sherwin-Williams can terminate the proposal if more than $1.5 billion of divestitures are necessary for antitrust approval.

Sherwin-Williams has agreed to pay $113 per share, representing a 41 percent premium over Valspar’s average volume-weighted share price for the 30 days including and leading up to Friday (March 18).

“The cost synergies are significant,” Morikis said, “We expect to realize the full run rate of $280 million in the second full year.”

Sherwin-Williams will continue to be headquartered in Cleveland, and the company intends to maintain a significant presence in Minneapolis, according to Morikis.

Ultimately, the transaction is about growth, Morikis said. Sherwin-Williams currently gets 84 percent of its sales from the U.S.

The Valspar acquisition will accelerate Sherwin-Williams' strategy to bring scale and platform to the Asia Pacific and EMEA regions as well as build upon strong brands and technology, Morikis added.

Sherwin-Williams intends to finance the transaction through a combination of cash on hand, liquidity available under existing facilities and new debt. The company reports it has obtained committed bridge financing from Citigroup Global Markets Inc. in support of the transaction and is committed to maintaining its current dividend and rapid deleveraging using significant free cash flow.

The Sherwin-Williams and Valspar deal as well as the recent Dow and DuPont merger are “good news for the sector as a whole,” experts say.

Mergers and acquisitions could be the key to boosting growth for the industry, which faces challenges due to global environment prices and demand, according to an analysis on seekingalpha.com.