Norway to Invest $1B in ‘Super-Cycleways’

In an effort to reduce its residents’ reliance on cars, one Scandinavian country is aiming to spend nearly $1 billion to build a new network of highways … for bikes only.

It’s not that Norway, which reported a population of just over 5 million in 2013, has a particularly robust cycling culture. Rather, it’s part of the country’s plans to reduce its transportation emissions to as close to zero as possible, Fast Company reported Tuesday (March 15). 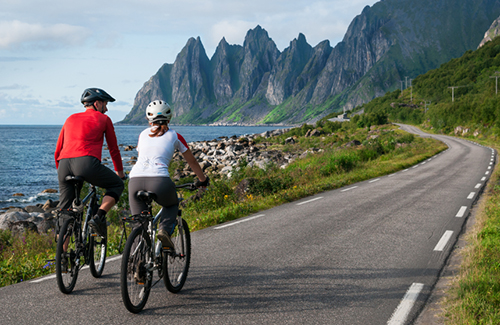 © iStock.com / andreusK
As part of its National Transit Plan to reduce transportation emissions, Norway plans to spend nearly US$1 billion to build a new network of highways … for bikes only.

The nation’s long-term goals are to cut carbon emissions by 40 percent by 2030 and to be carbon neutral by 2050, the business magazine noted.

And because much of the country’s electricity is generated by hydropower, transportation infrastructure is the primary target for achieving these reductions.

These “super-cycleways,” as the Norwegians call them, will connect nine cities with surrounding suburban areas and are meant to encourage people to begin using bicycles instead of cars for daily commutes.

"Many Norwegians use their bike for sport and leisure activities rather than to commute to work and school," Marit Espeland, national cycling coordinator for the Norwegian Public Roads Administration, told Fast Company.

"By constructing more and better bike paths, we will contribute to make more people feel safe and make it easier to choose their bike instead of their car."

Currently, only about 5 percent of the population uses bikes for commuting purposes, CityLab noted. The national government hopes to raise that figure to between 10 and 20 percent by 2030.

To make them more attractive for long-distance travel, the new cycling highways will be separated from motor traffic and eliminate intersections, increasing safety for cyclists and allowing them to travel greater distances at higher speeds—up to 25 miles per hour, reports said.

Does It Make Sense?

Geographically and climatically, Norway may not seem to be the most sensible place to encourage cycling infrastructure. It’s a mountainous country in a northern region that brings it many dark, cold days throughout the year.

However, the people are said to enjoy an “outdoorsy culture” even in winter months. And since cities in similar locations—Edmonton, Canada, and Oulo, Finland—have built up a cycling infrastructure that maintains its ridership numbers even in the colder months, CityLab said, officials are hopeful that Norwegians will follow their lead.

While the concept of bike expressways is eye-catching, it’s just one part of the nation’s larger National Transit Plan.

The country will also invest in its road and rail infrastructure. The government expects to put 36 billion kroner (US$4.15 billion) into road repairs and expansions, and 18 billion kroner ($2.08 billion) will go into railway upgrades.

Norway is not alone in its concept of the super-cycleway, nor will it be the first of its kind.

Germany opened its first bicycle highway at the end of 2015, Phys.Org reported in December.

Although it opened as just a three-mile stretch, it is planned to stretch to reach 60 miles and connect 10 western cities and four universities. A study conducted by regional development group RVR predicts that Germany's new bicycle commuter roads will take 50,000 cars off the roads daily, the science and technology news site said.

Additionally, the first bicycle highway in Europe was approved in London in 2015, Inhabitat noted, and others are being planned for the Netherlands and Denmark.