Just in time for its 100th birthday celebration, the Rutherford B. Hayes Presidential Library & Museum in Ohio received a facelift, thanks to a donation of more than 100 gallons of paint and dedicated volunteers.

As part of the PPG Pittsburgh Paints’ Paint for a Change initiative, Color Haven Paint & Supply in Freemont and members of the local community teamed up to help refresh the first presidential library in the U.S., according to a recent press announcement. 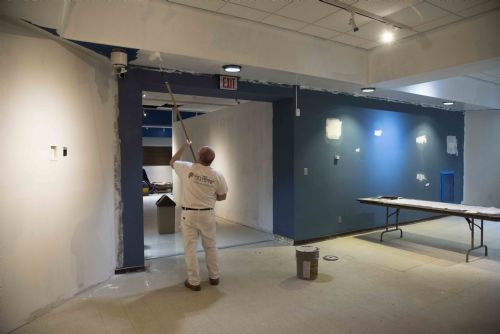 PPG Pittsburgh Paints
The painting project was part of a larger $1.3 million renovation of the Rutherford B. Hayes Presidential Center.

The historic center first opened in 1916. The facility includes the home, library, museum, tomb and 25-acre estate of the 19th U.S. President Rutherford B. Hayes.

PPG’s Paint for a Change program is a nationwide initiative to aid in the rehabilitation of community structures in need of paint restoration.

A local painting contractor, May Painting, also helped in the effort to revamp the presidential site, according to the project announcement.

The colors, which were applied to walls and ceilings in the museum’s entrance, two main gallery areas, lobby and museum store, include soothing grays, deep reds and creamy whites.

“This project is particularly exciting given the historical significance of the building as the first presidential library in the United States, and we are grateful for the opportunity to help bring the space to the present with PPG Pittsburgh Paints,” said John Trenta, senior brand manager for PPG Pittsburgh Paints.

The painting updates, which began on Jan. 13 and wrapped up mid-February, were part of a larger, ongoing $1.3 million renovation project that will conclude in May 2016, according to project details.

In addition to fresh paint, the renovations include new interactive exhibits, a new café, and other amenities that will be unveiled during a large centennial celebration over Memorial Day weekend to commemorate the museum’s 100th anniversary.

The updates are key for the library and museum to stay relevant to today’s visitors, the library’s executive director Christie Weininger told a local NBC affiliate.

She said President Hayes had been a lifelong collector, who had a strong connection to artifacts.

“He felt artifacts could put you in a time and place like nothing else could,” she told NBC24.

Thus, hundreds of volunteers are working hard to bring those artifacts back to life for generations to come, the report added.