Can anyone really own a color? If you’re artist Anish Kapoor, the answer is yes. If you’re among his fellow artists, that’s a definite no.

The Indian-born British artist stunned the art world this week when he announced he’s won exclusive rights to use what’s described as the blackest black in the world, the Daily Mail reported Sunday (Feb. 28).

Kapoor has laid claim to a paint called Vantablack, a pigment so dark that it absorbs 99.96 percent of light. 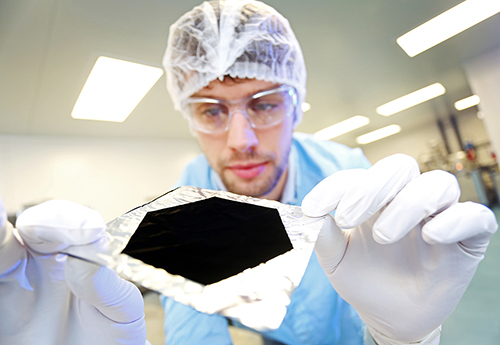 The company describes Vantablack as a free-space coating consisting of a “forest”' of aligned and equally spaced, high aspect-ratio carbon nanotubes (CNTs).

Most of the light arriving at the surface enters the space between the CNTs, and is repeatedly reflected between tubes until it is absorbed and converted to heat, it says. This heat (largely undetectable in most applications) is conducted to the substrate and dissipated.

Reportedly, the paint absorbs so much light that the human eye cannot see the kinds of shadows that help the brain to interpret the shape of an object, the Daily Mail said.

The developer demonstrates this by applying the paint to a wrinkled piece of aluminum foil, which largely appears flat in the area the paint is applied.

As an artist who has long used color to create optical illusions like this, these properties helped draw Kapoor to use Vantablack in his work, Smithsonian magazine reported.

Originally designed for use on satellites and later used on Stealth jets, NanoSystems’ suggested range of applications range from solar energy and spectroscopy to passive climate controls and visual spaces in architecture.

Interestingly, artwork is included in that list, even though a Surrey NanoSystems spokesman confirmed to the Mail that only Kapoor is permitted to use the paint as an artist.

“I've never heard of an artist monopolising a material,” Christian Furr told the paper. “Using pure black in an artwork grounds it.

“All the best artists have had a thing for pure black —Turner, Manet, Goya,” he added. “This black is like dynamite in the art world.”

Furr was planning to use Vantablack in an upcoming series of work. He spoke for his fellow artists when he noted, “We should be able to use it. It isn't right that it belongs to one man.”

Artnet news also quoted British Indian artist Shanti Panchal as saying, “I have not known of anything so absurd. In the creative world, artists, nobody should have a monopoly."

In 1960, French artist Yves Klein invented the color International Klein Blue and patented it. The difference, the magazine notes, is that Kapoor didn't invent Vantablack and that its performance properties are particularly unique.