Paint and coatings manufacturer AkzoNobel has issued its first round of carbon credits to ship owners switching to biocide-free hull coating systems to reduce their emissions.

The company awarded more than 126,000 carbon credits—worth more than $500,000—in total to 16 ships participating in its incentive strategy for the shipping industry, the company announced Tuesday (Feb. 23). 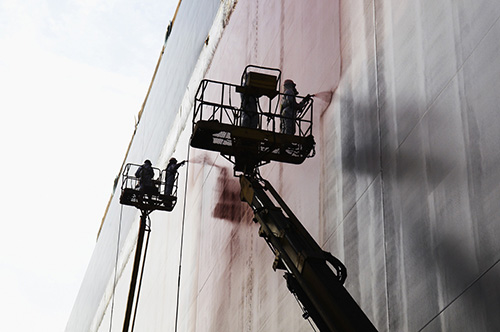 Images: AkzoNobel
The 16 ships enrolled in AkzoNobel's carbon credits program are reported to have achieved savings of more than 1,250 tons of fuel and 4,000 tons of CO2

"This is a tremendous moment both for AkzoNobel and the customers involved," said Oscar Wezenbeek, managing director of AkzoNobel's Marine Coatings business.

Carbon credits (also called a carbon offset) is essentially a financial tool that represents 1 tonne of CO2 or carbon dioxide-equivalent (CO2e) gases reduced or removed from the atmosphere as a result of a dedicated emission reduction project. A carbon credit acts as a permit granting the holder the right to emit 1 tonne of CO2 or CO2e per credit held.

The carbon credits program is designed to reward ship owners who convert existing vessels from a biocidal antifouling to a premium, biocide-free advanced hull coating, such as the company’s own product.

On average, the company says, each of the 16 vessels included in the first issuance achieved savings of just over 1,250 tons of fuel and 4,000 tons of CO2 per year, resulting in the award of 126,785 credits by the Gold Standard Foundation.

The company expects that number to grow as more vessels continue to enroll in the program.

Based on the average 10 percent CO2 savings recorded in this first carbon credits issue, the full fleet of over 4,500 vessels currently using the company’s product has already achieved total annual reductions in carbon emissions of around 17 million tons of CO2, it says.

That figure represents around 1.5 percent of the global emissions from shipping, as estimated by the 3rd IMO Greenhouse Gas Study, it adds.

Launched in 2014, the company’s carbon credits program was developed in conjunction with the Gold Standard Foundation, a standard and certification body for carbon offset projects, and business consultancy the Fremco Group.

The issue of the carbon credits followed a rigorous assessment process that validated and verified the fuel consumption data of the 16 participating vessels.

Each vessel’s baseline emissions level is determined prior to the specified hull coating, and the same data source then calculates the emissions savings after the new coating’s application, Sustainable Brands explained.

The resulting fuel and emissions reductions are “directly tied” to the carbon credits issued to the ship owner, the news site added, which contributes to reduced operating costs and extra income for the owner.

AkzoNobel is currently in discussions with the enrolled ship owners regarding sale and offsetting options for their credits.