A university in Oman has developed the region’s first antifouling marine nanocoating, according to an announcement following a month-long field test of the coating at a local marina.

Almouj Marina, located at Al Mouj Muscat, Oman, was the site of the testing phase for an environmentally friendly and technologically enhanced antifouling coating for vessels and other submerged structures, the facility said in a Feb. 17 statement. 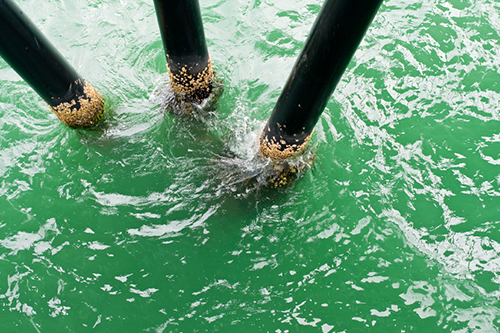 © iStock.com / DRB Images, LLC
Through a field trial, researchers their newly developed non-toxic coating was proven to be as effective as commercial anti-fouling paints without endangering the environment.

The field experiment was held in collaboration with researchers from Sultan Qaboos University, the only public university in the Sultanate of Oman.

The partners anticipate the project, the first of its kind in the region, could help preserve Oman’s unique marine environment and save the maritime industry millions of dollars annually.

“This milestone moment is a major step forward in our quest to prevent the degradation and pollution of marine species in the Sultanate,” Khalil AbuJaber, marina manager of Almouj Marina said.

Biofouling, though a major problem for the marine industry worldwide, has a particular impact on Oman, given its long coastal areas, said Dr. Sergey Dobretsov, Head of Department of Marine Science and Fisheries at Sultan Qaboos University.

“As such, the development of an environmentally friendly coating will bring massive benefits to Oman, ranging from sustaining wildlife and ecosystems to significantly reducing costs,” he added.

“Its success has the potential to ramp up efforts to protect our oceanic treasures and position Oman as a safe haven for oceanic life,” AbuJaber added.

Through the field trial, the university team said the application of its newly developed non-toxic coating was proven to be as effective as commercial anti-fouling paints without endangering the environment.

For decades, the team explained, toxic compounds have been used to keep the submerged hulls of ships, industrial equipment and other structures free of colonization by unwanted organisms such as bacteria, barnacles, and algae. This has led to the contamination of marine environment and harming of many marine organisms.

However, the nanocoating developed for the experiment in Almouj Marina, is said to be technologically enhanced and able to cover more surface with less material.

Produced with the aid of nanotechnology, researchers said the coating successfully reduced the impact of biofouling on waterways, marine life, maintenance cost and fuel consumption.

“Almouj Marina was the ideal location to conduct this experiment thanks to its clean and clear waters as well as their dedication to marine conservation,” said Dobretsov.

“The result is a coating that is free of toxic chemicals and capable of transforming marine preservation in Oman,” he added. “Moving forward, we hope our next phase of research will be the beginning of new era for marine industry in the Sultanate.”

Undertaken through a February 2015 agreement between both parties, and with the help of The Research Council (TRC) of Oman, the first experiments were undertaken on fishing nets.

The project’s extended phase, in which researchers will focus their trials on larger surfaces in longer-term experiments, is scheduled to begin soon.