PHMSA: Corrosion Root Cause of Spill

A federal pipeline safety agency has formally identified external corrosion as the cause of a May 19, 2015, oil spill along the Santa Barbara, CA, coast.

The U.S. Department of Transportation’s Pipeline and Hazardous Materials Safety Administration (PHMSA) Office of Pipeline Safety released its Preliminary Findings Report from the investigation into the incident Wednesday (Feb. 17). 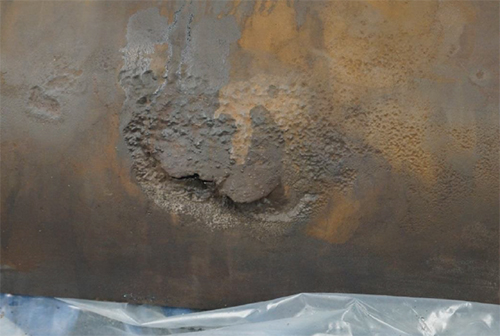 PHMSA
The Pipeline and Hazardous Materials Safety Administration (PHMSA) has formally identified external corrosion as the cause of a May 2015, oil spill along the Santa Barbara, CA, coast in its recent Preliminary Findings Report.

In addition to confirmation of the role corrosion played in the accident, the report indicates that the volume of oil released was much higher than originally reported: a total of 3,400 barrels may have been released, as opposed to the 2,400 noted in owner Plains Pipeline LP’s initial reports.

The agency expects to release its final report in late spring 2016.

The new PHMSA report contains additional preliminary factual information regarding the events leading up to the release and the technical analysis that has been conducted to date.

The pipelines are coated with coal tar urethane and covered with foam insulation and a tape wrap over the insulation. The shrink-wrap sleeves, meant to provide a barrier between the steel pipeline and soil for corrosion prevention, are present at all of the pipeline joints on Line 901 and multiple locations on Line 903, it says.

The report indicates that the corroded section of pipe burst after pumps on the pipeline were shut down and restarted, sending a larger volume of oil through the pipe at higher pressure—a jump to 721 pounds per square inch from the earlier 677 psi.

Earlier reports of 100,000 gallons of crude oil being released have not been raised to more than 140,000 gallons.

A pipeline leak monitoring system in the control center was also reported to have been turned off, although this item is still under investigation.

The most recent PHMSA report officially confirms earlier phases of the investigation that revealed corrosion in sections of the pipe and a questionable inspection history.

Immediately following the May 19 spill, PHMSA issued a May 21 Corrective Action Order requiring Plains to purge Line 901 and keep it shut down until the agency approved its restart.

The order also demanded a review the pipeline’s construction, operating, maintenance, and integrity management history; an expedited review of data from the May 5 in-line inspection (ILI); metallurgical evaluation of the failure site; repair of any integrity-threatening anomalies identified by the ILI survey; and a root cause failure analysis.

As reported shortly after the rupture, Plains Pipeline's Line 901 was showing four areas of “anomalies requiring immediate investigation and remediation” when the company last inspected the line May 5—two weeks before it burst, according to PHMSA. However, Houston-based Plains said it had not received results of the inspection until several days after the pipe failed.

The agency’s findings at that time demanded more answers and immediate corrective actions, including:

The pressure reduction on Line 903 was intended to ensure safety until all facets of the line’s integrity could be evaluated. However, several months later, in November 2015, PHMSA ordered Plains to purge the oil remaining in its nearby, idled Line 903, which was constructed and operated in the same way.

At that time, PHMSA indicated that Line 903 showed "similar corrosion characteristics" as Line 901. The unprocessed crude in the line could also contain corrosive elements that would lead to another break, it added, especially as the rust inhibitor intended to prevent corrosion would become less effective over time.

The order stated that the pipeline would remain shut down after being cleaned out, tested and filled with inert gas to inhibit further degradation.

During its investigation, PHMSA brought in third-party experts to review of the metallurgical properties of the failed pipe section and the ILI survey data.

The metallurgical evaluation of the failed pipe section was conducted by Det Norske Veritas – GL and witnessed by PHMSA, California Department of Fish and Wildlife, and the U.S. Department of Justice.

The group’s final report, issued Sept. 18, 2015, indicated: “the leak occurred at an area of external corrosion that ultimately failed in ductile overload under the imposed operating pressure. The morphology of the external corrosion observed on the pipe section is consistent with corrosion under insulation facilitated by wet-dry cycling.”

An unnamed third-party expert also reviewed Plains’ ILI surveys. Line 901 had been assessed every five years (2007 and 2012), changing to a three-year cycle (2015) based on changes in integrity risk, according to PHMSA requirements.

Data from these surveys are required to be evaluated within 180 days and immediate corrective action taken if necessary. However, the May 6, 2015, survey data for the first two miles of Line 901 was found to be incomplete and not useable for ILI analysis.

For the rest of the ILI survey, the correlation digs, which are used to gauge survey data accuracy with the preliminary report, had not been finished at the time of the May 19 failure, the report stated.

PHMSA’s third-party ILI expert also examined data from past ILI surveys of Line 901, finding the number of corrosion anomalies on the line increasing:

PHMSA inspectors noted moisture pulled into the insulation at four excavations performed by Plains on Line 901 after the May 19 spill and prior to the PHMSA-mandated purging of the pipeline.

The investigation is ongoing.