U.S. Transportation Secretary Anthony Foxx has shared detailed information on the U.S. Department of Transportation’s budget for fiscal year 2017 in a series of recent statements.

According to Foxx, the DOT has a budget of $98.1 billion to work with in 2017 under President Obama’s budget proposal, with $3.5 billion of that intended for expansion of transit options.

“Meeting future challenges will require a long-term vision for the transportation sector that includes more and cleaner options, and expands those options to communities across the country,” Secretary Foxx said of the full DOT budget in his Feb. 9 statement to the press. “This budget brings us closer to that vision.”

The FY2017 DOT budget takes into account Secretary Foxx’s vision—shared in his 2015 report, “Beyond Traffic”—for the DOT to help move the country, over the next 30 years, toward a transportation network that more adequately meets the changing needs of drivers, encourages innovation and adaptations to evolving technology, and provides cleaner transportation options and access to across the country. 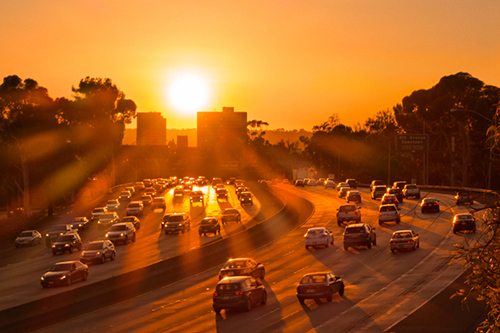 The population of the U.S. is expected to grow by 70 million over the next three decades, creating pressures that cut across modes and infrastructure—roads, rails, aviation, ports, and pipelines, the report said.

This budget takes steps toward a modernized approach to transportation funding that acknowledges the need for a regionally focused approach and prioritizes spending on projects that will have the most benefits for the American people, the DOT’s budget fact sheet says.

In addition to refocusing the flow of federal transportation dollars to investments in regional economies, the budget gives priority to multimodal investments like transit and high-speed rail. These options are featured because they not only offer cleaner transportation alternatives but also deliver more access to opportunity, the DOT says.

The budget fully funds FAST Act levels for FY2017, which include programs aimed at keeping the system safe and in a state of good repair:

Additional information is available in the DOT’s Budget Highlights download.

“Since 2009, the Obama Administration has funded nearly 100 new and expanded mass transit projects in numerous cities and metropolitan areas across the country,” Foxx explained.

“These projects transform communities, improving mobility and access to jobs, education and other important opportunities for millions of people. Public transit is an important ally in the effort to ensure that hard-working Americans are offered a chance to succeed in the 21st century economy.”

“FTA is proud to partner with communities across the country to bring more transportation options to residents and help accommodate our nation’s growing population,” said FTA Acting Administrator Therese McMillan.

The program includes funding for three categories of eligible projects, as defined by the FAST Act: New Starts, Small Starts and Core Capacity.

Funding recommendations for FY2017 include: