App Made to Detect Seismic Activity

Scientists in California want to turn our smartphones into a worldwide seismic network.

That’s right. Seismologists at the University of California, Berkeley, have launched a free Android app that taps a smartphone’s ability to record ground shaking from an earthquake.

Ultimately, the team says the app could eventually warn users of impending jolts from nearby quakes.

The app, called MyShake, is available from the Google Play Store. An iPhone app is also planned.

How Does It Work?

According to an announcement from UC Berkeley, the app uses the phone’s onboard accelerometers (built-in for gaming or display) to record local shaking any time of the day or night. The app runs in the background on little power, the team says.

For now, the app only collects information from the accelerometers, analyzes it and, if it fits the vibrational profile of a quake, relays it and the phone’s GPS coordinates to the Berkeley Seismological Laboratory for analysis, according to UC Berkeley.

May Be the Only Option

The team warns that the app is not a replacement for traditional seismic networks like those run by the U.S. Geological Survey or Caltech.

Allen is the director of the Berkeley Seismological Laboratory and a professor and chair of the Department of Earth and Planetary Sciences. 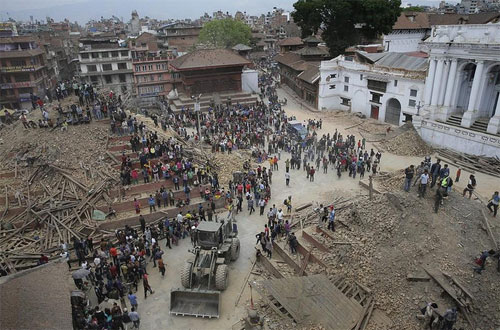 Mapbox / Flickr/ CC BY 2.0
Thousands were killed and four of seven UNESCO World Heritage Sites in Nepal were damaged by a 7.8 magnitude earthquake that struck April 25, 2015.

A crowdsourced seismic network may be the only option today for many earthquake-prone developing countries, such as Nepal, that have a sparse or no ground-based seismic network or early warning system, but do have millions of smartphone users.

Allen and his team hope that thousands of people will download and install the app so that he and his colleagues can give MyShake “a good test.” If successful, he anticipates an updated app that will provide early warnings within a year.

“In my opinion, this is cutting-edge research that will transform seismology,” said UC Berkeley graduate student Qingkai Kong, who developed the algorithm at the heart of the app.

The team’s findings were published Feb. 12 in “MyShake: A Smartphone seismic network for earthquake early warning and beyond,” in the journal Science Advances.