The country's largest dam, which had been taken over by the Islamic State (IS) briefly in 2014, faces catastrophic failure from two faults: a “lapse in maintenance” and flawed construction, which sited the structure on unstable soils that erode when in contact with water, The Guardian reported Tuesday (Feb. 2), 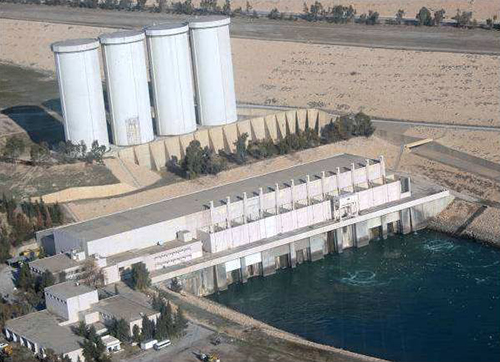 By U.S. Army Corps of Engineers / Public domain via Wikimedia Commons
A “lapse in maintenance” and flawed construction threaten the structural integrity of Iraq's Mosul dam. Trevi Group has won the bid to begin repair and maintenance on the structure.

The poor structural integrity is significant enough that the U.S. military prepared a contingency plan in case of failure, according to Reuters reports.

As far back as 2007, the U.S. ambassador to Iraq and the top American military commander in the country warned that, at worst, “an instantaneous failure of Mosul dam filled to its maximum operating level could result in a flood wave 66 feet deep at the city of Mosul,” Iraq’s second-largest city, about 25 miles away, The Guardian wrote.

At the Rome press conference announcing the bid award, held with U.S. Secretary of State John Kerry, Foreign Minister Paolo Gentiloni confirmed that the Iraqi cabinet and the country’s ministry of water resources had selected Trevi to carry out the rehabilitation and maintenance work.

Terms of the contract, which reports say will be finalized within a matter of days, were not disclosed.

However, because the dam is located near IS-held Mosul, Italian military will be required to defend the site and protect workers. Prime Minister Matteo Renzi had earlier indicated that 450 troops would be deployed for this purpose, Reuters reported.

"We have been in contact with Baghdad for many weeks, and the Italian forces will be deployed to defend the work site in agreement with the coalition," Gentiloni said during the press conference.

According to the U.S. Army Corps of Engineers: "in terms of internal erosion potential of the foundation, Mosul dam is the most dangerous dam in the world," ABC Online reported.

The Iraqi government has had to address construction flaws in the 2.2-mile-long dam since its completion in 1984, The Guardian wrote. Workers injected a mortar-like grout into the subsoil and cavities to help shore up the foundation and control seepage.

However, the problem grew when Isis seized the dam for a two-week period in 2014. With maintenance disregarded, the structure became further weakened.

Grouting work is underway once again in a long tunnel that stretches under the dam, ABC Online said. Hussein Hamad Ahmed, an engineer at the dam, told the news agency that workers drill down from the tunnel to a specific point, the inject grout to fill any gaps that have appeared underneath.

Additionally, the U.S. has put sensors on the dam to measure how much it is moving or deteriorating over time, Lt. Gen. Sean MacFarland, the commander of the military operation against Isis, told The Guardian.

If a collapse happens, "it's going to go fast," he told ABC Online.

Trevi’s repair and maintenance of the dam is expected to take 18 months to complete.