Scheduled to replace the existing Sixth Street Viaduct, the new structure’s design of 10 repeating concrete arches crossing over two freeways, two rail lines and a river is expected to become an eye-catching destination in its own right 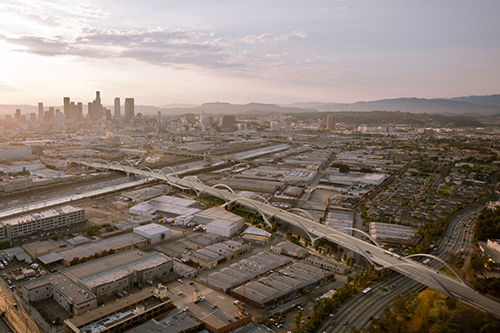 Construction of the replacement viaduct is set to begin this week, digital architecture and design magazine designboom reported Monday (Feb. 1).

The existing Sixth Street Viaduct, built in 1932, is an instantly recognizable icon to movie fans and TV viewers, having been featured in movies like Grease and Terminator, with scenes of car chases or races occurring underneath the steel and concrete span.

However, the original structure has fallen victim to alkali-silica reaction, which is eroding its concrete piers, online architecture and design magazine Dezeen reported. The bridge also does not meet current seismic standards.

It was closed to traffic on Jan. 27 and is scheduled for demolition Feb. 5.

Michael Maltzan Architecture’s (MMA) new $449 million bridge, designed in partnership with architecture and engineering firm HNTB and engineering company Skanska, features a series of splayed arched trusses, which the The Independent describes as resembling “the trajectory of a rubber ball bouncing the length of its 3,500-ft span.”

The firm calls the use of pairs of repeated concrete arches and cable-supported roadway deck “simultaneously elegant and efficient.”

The segmentally constructed arches incline outward from the deck, and the repetitive pier forms beneath angle outward, resolving the geometries of the bridge’s inner and outer profiles, the firm says.

The bridge deck, suspended from the cable lattice at its perimeter, is described as a highly efficient, thin profile. Because the viaduct’s spans are similar, foundations at each pier are also nearly identical, further improving efficiency, according to MMA.

“As you drive across it, the space should unfold in a cinematic way,” Maltzan told the paper, “so the experience of the new bridge is a kind of equivalent to the films and TV shows that were made on the existing one.”

Designing for a ‘Multimodal Future’

According to MMA, the new design is the result of an international design competition led by the City of Los Angeles Bureau of Engineering. The firm sees this unusual approach to an infrastructure project of this magnitude as a symbol of the city’s commitment to making the new Sixth Street Viaduct an iconic and lasting landmark for Los Angeles.

The design team approached the project with the mindset that it is “more than a simple replacement thoroughfare crossing the Los Angeles River.” Instead, it plans for a “multimodal future” for the city that accommodates cars, incorporates bicycle connections, and increases connectivity for pedestrians along the entirety of its span.

The structure’s arches create large areas of open space below the bridge that are slated to become new recreational green spaces and urban parks. A wide range of public activities and open space will be planned for the eastern underside of the viaduct in what was an industrial zone.

Plans include five pedestrian stairways along the length of the viaduct connecting the bridge level with the ground below and two bike ramps for cyclists. A new sloping River Gateway path will link the River to a future Arts Plaza in the heart of the Arts District.

On Jan. 27, Mayor Eric Garcetti announced that Leonard Hill, a founding partner of Linear City Development, will donate $1.9 million to the Mayor’s Fund for Los Angeles for the design, construction, and programming of the new Arts Plaza.

In his comments, Mayor Garcetti noted: “Just as the Sixth Street Bridge has connected the neighborhoods to the east and west of the L.A. River, Leonard’s incredible gift will give future generations of Angelenos a beautiful place to connect with the outdoors, their communities, and each other.”

The Plaza is expected to be constructed in 2019 and begin arts programming in the space in 2020.

The bridge itself is scheduled for completion in 2019. Said to be the biggest bridge project in the history of the city, The Independent speculates that it and the restored LA River area will contribute to making L.A. an attractive contender as site for the 2024 Olympics.