Researchers in the UK have found the presence of hazardous amounts of lead paint on public playground equipment across Southern England and warn the issue may be more widespread.

The study detected equipment with lead content up to 40 times greater than the recommended concentrations, along with higher than expected levels of cadmium, chromium and antimony, according to an announcement on the research.

Lead has been linked to neurological problems in children, among other health issues. 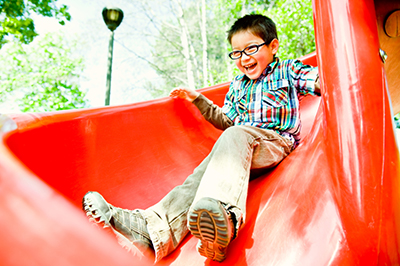 ©iStock.com / Manley099
The scientists from Plymouth University found lead levels of up to 152,000 parts per million on railings, supports, handles and gates on playgrounds throughout Southern England. They have called for more monitoring of these surfaces.

The team studied paints used on the playground equipment located at almost 50 playgrounds. Some of the areas analyzed were less than a decade old.

Led by Plymouth University environmental scientists, the study was published in the journal Science of the Total Environment.

“While undisturbed and intact, coatings and their chemical components are relatively safe,” said Dr. Andrew Turner, who led the research.

“But once the film begins to deteriorate through abrasion or via exposure to UV light and moisture, the paint begins to crack, flake and chalk and metal-bearing particulates are mobilized into the environment.

“The effects of lead on human health, including those that impact on the neurological development of children, are well-documented with regard to paint exposure in urban and domestic settings.”

The university’s announcement noted the team found lead concentrations in excess of historical standards. A 1977 EC Directive required that all paints containing more than 5,000 parts per million of lead should be labelled with a warning that they must not be applied to substrates likely to be chewed or sucked on by children, the report said.

Later guidelines adopted in the UK and other countries have recommended new paint be lead-free or contain less than 2,500 parts per million, the report noted.

Still, the researchers found lead levels of up to 152,000 parts per million on railings, supports, handles and gates on the playgrounds, with the highest concentrations showing in red or yellow painted equipment, the university reported.

The team used a field-portable X-ray fluorescence (FP-XRF) spectrometer to test the painted surfaces and analyzed paint flake samples in the lab.

The visual appearance of the painted structure was not a good indicator of the concentration of hazardous elements, as some of the equipment was “newer,” constructed in 2009, Turner said in a statement.

“Given that the total tolerable daily intake of lead for a child under six years of age is 6 micrograms, the results of this study suggest that very little ingestion is required to present a potential health hazard,” said Turner.

He also suggested that similar lead levels would be found in playgrounds across the UK and further.

“It is difficult to attribute poisoning directly to paint on playground equipment because the effects of lead are cumulative and children may be exposed to a multitude of sources of lead in domestic and urban settings,” the researcher noted. “But previous studies around elevated lead in blood levels and the ingestion of paint chips have strongly suggested that paint is the source of intoxication.”

According to the university’s announcement, the researchers made the following list of recommendations that public officials should consider in light of the findings.