Nanotechnology experts from Northeastern University in Boston say they have a developed an adhesive that binds metal to metal, sets at room temperature and requires little pressure to seal.

“It’s like welding or soldering but without the heat,” Hanchen Huang, professor and chair in the Department of Mechanical and Industrial Engineering at Northeastern, said in a recent announcement on the development.

Huang and his team say the metallic glue, called MesoGlue, has an array of potential applications, including solar cells, pipe fittings and components for computers and cell phones.

The team has published their findings in the January issue of Advanced Materials & Processes.

Fortune Magazine reports that the coating is in a class of its own, suggesting that the development may be the “21st Century’s Duct Tape.”

“Until now, adhering metal to metal has been a difficult, messy process or required soldering—fusing two parts together with a hot metal joint,” the media outlet reports. “Room temperature glues can’t really compete with this method: They don’t conduct electricity and many break down in heat.”

MesoGlue is a based on a system of “metal-cored nanorods” coated with a layer of liquid metal elements like indium and gallium.

“When those outer layers of elements are pushed together during gluing they interact with the nanorods inside the glue and turn solid, no heat required,” reports Fortune. 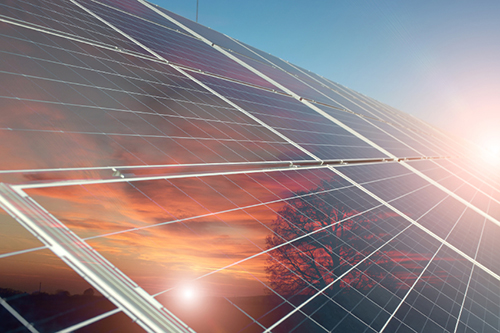 ©
In addition to computers and cell phone components, applications include solar cells.

The resulting glue provides the strength and thermal/electrical conductance of a metal bond, Northeastern University reports.

The researchers said they have received a new provisional patent for the development through Northeastern.

Inspiration behind the development came from the desire to make dye-sensitized solar cells last longer, according to Mesoglue.com.

The developers soon realized the adhesive could have other uses.

“We then heard reports of iPhones exploding, and realized that not only could we make devices safer, but could make them run cooler and last longer as well.”

MesoGlue was founded by Huang and two of his Ph.D. students who had “a dream of a better way of sticking things together.”