Each year, SSPC sets its sites on the future of the industry by shining a spotlight on the next generation of coatings professionals at the group's annual conference.

In addition to young professional networking opportunities and a “Recruiting Young Adults into the Coatings Business” session available at SSPC 2016, which closed Thursday (Jan. 21), the annual Poster Sessions give college and graduate students the opportunity to show their current or previous research and make themselves known to their future peers.

Poster presentations were on display at the conference Tuesday through Thursday, and the authors were available to discuss their work twice during the show. Ten projects were on display on the exhibit show floor.

Robert C. Bennett, from The University of Southern Mississippi, shared his research on “Rapid Production of CNT/PAni Coating with pH Sensing Capabilities.” 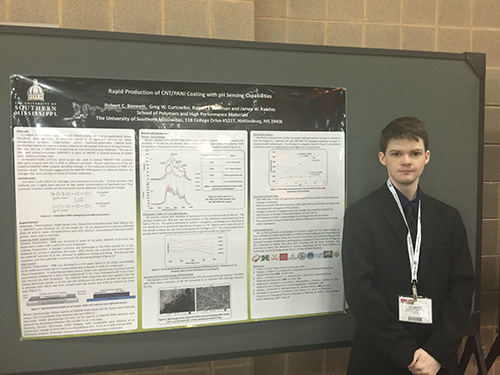 Bennett’s research is focused on synthesizing a system of carbon nanotubes (CNTs) and polyaniline in a blend so pH changes can be identified in an effort to detect and halt corrosion.

As hydroxls enter into the system, the polyaniline is deconjugated, lowering its electrical conductivity and increasing resistance, Bennett explained. “So when corrosion is occurring you’re able to see that shift,” he said, adding, that such a pH sensor would be used to detect corrosion for buildings and other structures.

Bennett will graduate with a bachelor’s degree in a year and a half and plans to work for a private company in Mississippi or pursue his master’s degree at the University of Oregon.

Curtzwiler explained that his research seeks to understand how to influence polymer carbon nanotube (CNT) interactions and how that will translate into differences in corrosion protection.

“I’m using very small carbon nanotubes in order to hinder ion transport through the material,” Curtzwiler said. “So basically what this research is showing is that as we change the surface of the carbon nanotubes we get different interactions with the polymer and better dispersion, and that’s going to have a lot of influence on the final properties of the actual coating.”

Coated steel substrates were evaluated via ASTM B117, he said, and after 168 hours he was able to see that introducing those surface interactions into the polymer influences the corrosion rate. He saw a decreased rate of corrosion as a result of that.

“Once I’ve removed the coatings and looked at how much ions transport through the material to reach the substrate with the CNTs present,” he said, “it is significantly less so than without them being present.”

His current research is trying to understand the mechanism of why there are fewer ions at the surface of the substrate as well as the coating. Graduating in the spring, Curtzwiler is looking at post-doctoral positions or tenure track faculty positions as he enjoys academia and teaching.

Saiada Fuadi Fancy, from Florida International University, presented research on “The Effect of Holiday Size on the Coating Disbondment of Polymer Coatings with Zinc-Rich Primer.”

Fancy evaluated test samples (3 by 5-inch steel coupons) in neutral and high pH solutions with and without chlorides. Three different mechanically induced defect sizes (1/16 inch, 1/8 inch and 7/32 inch) were introduced and compared with coated samples in the as-received condition.

Fancy correlated her findings from the impedance spectroscopy by fitting an equivalent circuit analog to the physical examination (radial cut, adhesion measurements and optical microscopy).

Fancy just started her second year as PhD student, concentrating on her research, her degree and establishing herself as a coatings specialist.

Zhicheng Gao, representing The University of Akron, spoke about his work on “Effects of Scratch Defects in Epoxy Coatings of Steel Reinforcing Bars Embedded in Structural Concrete.”

Gao’s objective was to establish corrosion behavior of epoxy-coated steel bars with surface damage under service conditions and to determine an upper limit for surface damage tolerance of the coatings.

In his study, carefully planned areas of surface damage, ranging from 1 percent to 5 percent, were prepared on epoxy-coated bars. Reinforced concrete test slabs with uncoated reinforcing bars and with epoxy-coated bars, with the specified amount of damage, were subjected to corrosion in a 5 percent salt solution under sustained mechanical loading.

Corrosion was accelerated with an electrical current, and Gao found the induced damage of about 5 percent on epoxy coatings caused significant reduction in residual moment strength of the test specimens. He also found that the epoxy coatings became brittle and peeled off from the surface of the uncoated steel bars after the corrosion tests.

In the future, in addition to finishing his PhD, Gao plans to add different fibers into concrete to see if additional fibers further increase corrosion resistance and reduce capacity loss.

Minjung Joo, also from The University of Akron, shared her presentation titled “Effect of Pigmentation on the Inorganic Phase of Epoxy.”

Due to their incompatibility or high surface area, pigments such as titanium dioxide easily aggregate and interact with other components such as TEOS oligomers. The objective of Joo’s study was to investigate the interaction between pigmentation on the inorganic phase of the hybrid coatings. She tried different pigment volume concentrations in accordance with TEOS oligomers and analyzed the coating properties.

She found that even dispersion could create better mechanical properties in terms of toughness. “Based on that I’m thinking I will study the corrosion resistance—since it’s better dispersed, it might give us better corrosion resistance too,” she said.

As a fourth-year PhD student, Joo is seeking a job in the industrial field and is very interested in the coatings area.

Sinuo Lang, from The University of Akron, spoke about “Microcapsules Based on Self-Healing Coatings for Corrosion Protection.”

In this study, in which polyuria-formaldehyde (PUF) and linseed oil are employed as shell and core materials, respectively, Lang intends to establish reliable techniques to rapidly evaluate the performance of synthesized microcapsules.

Md Ahsan Sabbir, of Florida International University, talked about his research on “Assessment of the CBPC Coating in Alternate Wet and Dry Exposure.”

As a part of his research to assess novel coatings, Sabbir investigated chemically bonded phosphate ceramic (CBPC) coatings. The preliminary result of outdoor testing in a hot and humid environment showed significant coating degradation that allowed sufficient moisture and oxygen to the steel substrate. That may accelerate formation undercoating corrosion, Sabbir said.

To further examine possible corrosion degradation, he investigated the CBPC coating by electrochemical methods in neutral pH environments with simulated alternate wet and dry exposure in the laboratory.

The conventional interpretation of the impedance response of a coated metal interface was assumed as a first approach to evaluate possible degradation, and an equivalent circuit analog was used to fit the impedance data to the physio-electrochemical parameters associated with that system. The parameters resolved from the impedance spectroscopy were correlated to the physical examination.

Sabbir said his assessment will provide important information on coating degradation mechanisms to the bridge owner and help him/her to select the proper maintenance procedure.

He described his research as focusing on changing different alkyds and adding different functionalities to give it very good properties for certain applications. “The main focus of this experiment is to see if I could get good surface properties while still getting good adhesion,” he said.

He explained this can be done using fluorinated coatings, which give it lower surface energies that make it resistant to grease, oil and dirt. “The same properties that make it resistant make it difficult to adhere to substrates,” he added, “so I’ve also added this alkoxysilane using sol-gel chemistry to increase the adhesion and then when applied the fluorinated groups the surface energy would migrate to the surface so I’d get the best of both worlds.”

Salata says he was able to improve upon the standard alkyd coating and saw increased adhesion and very good chemical resistance while it still maintained its flexibility.

Another part of his research was to decrease the curing time of alkyds, which inherently have long drying times, he explained, without using toxic metal driers.

“We did this by incorporating photoinitiators and photosensitizers which are able to bump the curing range into the visible light range,” he said. With this he was able to reduce the drying time from four to eight hours down to about an hour or an hour and a half.

Salata is a third-year PhD student who plans to continue his work in the coatings industry.

The challenge to the sustainable movement is to produce materials from renewable resources that will be both economically feasible and have comparable properties to current technology.

“Our new developments of bio-based resins from materials that can be found in your kitchen—sugar and soybean oil,” Paramarta said.

The type of anhydride crosslinker and curing condition is varied to evaluate the impact of these factors on the coatings properties such as hardness, adhesion, modulus, glass transition temperature, and impact and solvent resistance.

“We make coatings and plastics from those materials with different crosslinkers so the materials performance can be adjusted to make soft elastomeric materials like synthetic leather or foams into hard coatings that can be used for a pipeline or bridge,” she said.

Depending on type of anhydride, the obtained coatings can have up to 100 percent bio-based content, she said. Additionally, these coatings are expected to have comparable properties to current petrochemical-based technology and will have a potential to be used as factory applied metal finishes.

Graduating in two months, Paramarta plans to keep working in coatings field, where she sees lots of opportunities.

The main idea behind the research, she explained, was to provide a mechanism to verify the integrity of outsourced data in the cloud by using provable data possession (PDP) algorithms.

"Cloud computing provides a reliable and robust infrastructure for users to remotely store and access huge amounts of data,” she said. “However, data integrity in the cloud is a major security concern as data owners no longer physically possess their sensitive data.”

In Sunkireddy’s study, she provided a comparative analysis of various PDP schemes, investigating not only for static data but also protocols that handle the dynamic behavior of outsourced data.

She implemented a prototype that allows the data owner to outsource their data and dynamically update the data by inserting, deleting or modifying some data blocks. The prototype also evaluates the performance of different PDP schemes from different perspectives such as pre-computation times, computation times, verification times and storage overhead.

Sunkireddy is in her final semester at St. Mary’s, where she is completing a master’s program in computer science.

The casual two-hour event provided an opportunity to network, socialize and discuss how the next generation can impact the industry, learn what career paths are available and seek a leadership role to shape the future.

Ten students received $2,500 scholarships during the awards luncheon Jan. 18. A panel of SSPC Board of Governors members selected the recipients. The 2015-2016 scholarship recipients are:

Editor's note: This story was updated to include more information on Sunkireddy's research.