Public Art Chattanooga, a division of the City of Chattanooga, TN, commissioned the $200,000 painting project that covers the four sides of buildings on M.L. King Boulevard.

According to website of the Chattanooga Times and Chattanooga Free Press, the area chosen for the mural was once the city’s center of black culture and business. 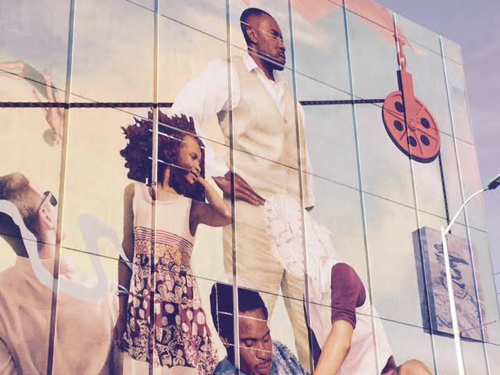 “It will show that we have vigor and vitality,” City Councilman Moses Freeman, who represents the district, told the newspapers. “Not only will we grow this street, but we will grow the economy of this community and of our city as a whole.”

The southeastern Tennessee city—located only about 120 miles from where King was born and in the same state in which he died—hired Philadelphia-based artist Meg Saligman to create the mural, according to a brochure the art movement distributed.

Saligman has been a traveling muralist for more than 25 years, the group said. Her studio specializes in producing the largest murals in the country. The group said she and her team have been recognized by the National Endowment for the Arts as well as the Smithsonian Institute.

She used several Chattanooga artists to assist her during the one year of planning and six months of painting. In the end, the group completed what it said is the first-ever painted mural to wrap a city block.

There are more than 20 historic or living people who represent the aspects of Black culture, M.L. King Boulevard and Chattanooga painted in the mural—officially called the M. L. King District Mural—the group said. Artists painted 2,000-square-feet per day to complete the 42,179-square foot mural by King’s commemorative birthday.

For equivalency, the group said, that’s like painting a 5-story-square canvas every seven days for five months straight.

More than 565 community volunteers helped paint the portraits on an acrylic cloth with a paint-by-number system the artists created, the art group said. They used more than 420 gallons of paint, 120 brushes, five paint sprayers and 120 yards of the acrylic fabric.

The mural is expected to last between 25-30 years.