Two of 24 pre-cast concrete spans that will carry an elevated train for Australia’s largest public transportation project have cracked less than a year after they were installed.

Transport for NSW—which confirmed the cracking to the Sydney Morning Herald after the newspaper inquired about the problem—said last week there should be no delay in the overall construction of the AU$8.3 billion (US$5.7 billion) Sydney Metro NorthWest project. The system is due to open in early 2019.

“The rectification of the cracking may result in these two spans being replaced,” said Tom Gellibrand, Sydney Metro acting program director in an emailed statement to the newspaper. “This is a straightforward construction process.”

The section, known as the Skytrain, is one of three major parts of the project. One of the other components is a system of tunnels that also will carry trains in Australia’s largest public transportation project. The other is building and running the trains themselves. 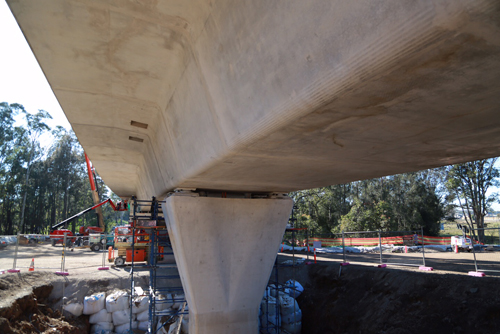 Photos: Sydney Metro Northwest
Two of 24 pre-cast concrete spans already installed for Australia's elevated rail, Skytrain, have cracked less than a year after they were put in place.

On Jan. 14, Premier Mike Baird and Transport Minister Andrew Constance announced early and under-budget completion of the drilling for the 15-kilometer (9.3 mile) twin tunnels. The Skytrain portion of the system is expected to open in 2017.

The project west of the tunnels has seen its share of problems.

In addition to the cracking, Italian consortium Salini Impregilo claimed a AU$50 million (US$34.5 million) contract variation because of the discovery of asbestos at the job site and disputes over the design, according to the daily newspaper. Now, the pre-cast concrete in the spans the consortium built are cracking.

But Sydney Metro said the problem is not that great of a concern.

“It is not uncommon for cracking to occur within reinforced concrete and there is a comprehensive inspection program in place for the Skytrain construction, with any required repairs undertaken in accordance with quality assurance procedures and processes,” said Gellibrand.

Two gantry cranes are being used to assemble about 1,200 pre-cast segments up to the level of 130 concrete piers. The segments then form spans between the piers, and are partly held in place by steel cords that run through the segments. The spans have an average length of about 40 meters (43.7 yards), the newspaper said.

The news of the cracking didn’t sit will with a political group called The Greens nor with the workers on the project.

Mehreen Faruqi, spokeswoman for The Greens transport, told the newspaper that the problems in the project were the “hallmarks of an infrastructure program where the public sector has been hollowed out of engineering expertise, and is unable to effectively oversee and supervise project delivery.”

A source for Skytrain also said morale has been low on the Skytrain team as a result of the problems.

“Most of the people that are there are completely disillusioned,” the source told the newspaper.