A Chilean architect whose global body of work addresses key challenges humanity faces in 21st century has been selected as the 2016 Pritzker Architecture Prize Laureate.

Alejandro Aravena, 48, based in Santiago, is the 41st laureate of the prestigious honor—the first from Chile and the fourth from Latin America. 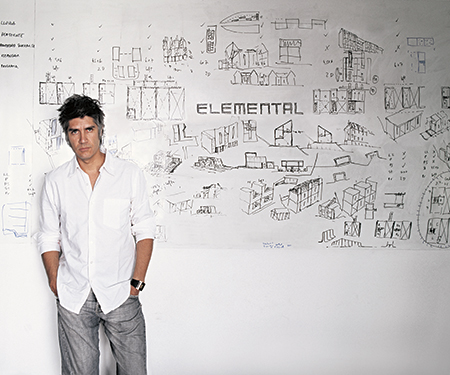 All images courtesy of ELEMENTAL; photographers noted. Photo by Cristobal Palma
Alejandro Aravena, 48, serves as the executive director of the ELEMENTAL architecture firm in Santiago, Chile.

“The jury has selected an architect who deepens our understanding of what is truly great design,” Tom Pritzker stated in an award announcement posted Wednesday (Jan. 13).

“Aravena has pioneered a collaborative practice that produces powerful works of architecture […]. His built work gives economic opportunity to the less privileged, mitigates the effects of natural disasters, reduces energy consumption, and provides welcoming public space. Innovative and inspiring, he shows how architecture at its best can improve people’s lives.”

The architect describes his passion for design and philosophy in this video.

These energy-efficient buildings respond to the local climate with innovative, efficient facades and floor plans and offer the users natural light and convivial meeting places, according to the announcement.

His current projects include work in Shanghai, China, where an office building for healthcare company Novartis is under construction.

Since 2001, Aravena has served as the executive director of the Santiago-based ELEMENTAL firm, described as a “do tank,” rather than a “think tank.”

The practice focuses on projects of public interest and social impact, including housing, public space, infrastructure and transportation.

Following the 2010 earthquake and tsunami that hit Chile, Aravena and his firm were called to work on the reconstruction of the city of Constitución; their work there included emergency relief work, a master plan, Villa Verde (incremental housing, 2013), and the Constitución Cultural Center (2014), the announcement noted.

‘No Achievement is Individual’

In commenting on the honor, Aravena expressed his gratitude, while nodding to those who have helped along the way.

“Architecture is a collective discipline. So we think, with gratitude, of all the people who contributed to give form to a huge diversity of forces at play. […]

“[L]ooking at the present, we are just overwhelmed, ecstatic, happy. It’s time to celebrate and share our joy with as many people as possible.”

Aravena will receive the coveted honor at the formal award ceremony set for April 4 at the United Nations Headquarters in New York.