The National Guard is delivering bottles of water in a Michigan community that has been plagued with lead coming out of its taps, a problem that could cost more than $1.5 billion to fix.

Gov. Rick Snyder made the announcement Tuesday (Jan. 12) to help get the thousands of bottles to snow-covered Flint households. To date, 43 people in Flint have been found to have elevated levels of lead in their blood.

Tuesday’s announcement was one of several in the past week from local, state and federal officials in the wake of trying to clean up what the governor now calls a state of emergency, according to multiple media reports. 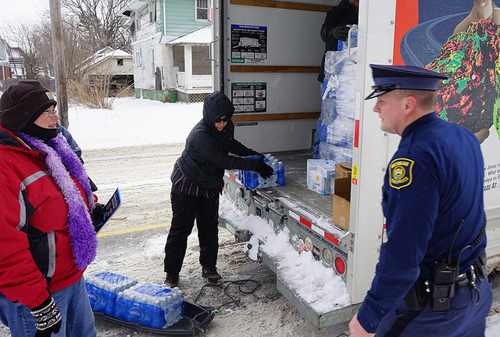 Michigan State Police Emergency Management and Homeland Security via Flickr / CC-BY ND-2.0
The National Guard and state troopers are getting thousands of bottles of water to Flint households. To date, 43 people in Flint have been found to have elevated levels of lead in their blood.

“As we work to ensure that all Flint residents have access to clean and safe drinking water, we are providing them with the direct assistance they need in order to stretch our resources further,” the governor told The New York Times. “The Michigan National Guard is trained and ready to assist the citizens of Flint.”

As previously reported, Flint residents have been dealing with concerning levels of lead coming out of their water supply since April 2014. That’s when the city switched its water supply from Detroit city water to the Flint River in what was supposed to be a cost-cutting measure.

In October, the city switched back to the Detroit supply after physicians, researchers and government officials acknowledged that the river was more corrosive than Lake Huron, which is the feeder source for Detroit’s water.

On Sunday (Jan. 10), the White House said on the NBC’s “Meet the Press” that it was monitoring the situation “very closely” and that state police troopers would be delivering water door-to-door, according to the Detroit Free Press. The day before, officials also told residents they could pick up water at the city’s fire stations.

The urgent move from the federal government came after Flint Mayor Karen Weaver told MLive.com that fixing the water crisis could cost into the billions.

“We’ve heard from millions up to 1.5 billion,” the mayor said after a meeting with Gov. Snyder. “We’re doing assessments right now to see what it's going to cost.”

Weaver told the online news source that the cost estimate was for the city’s infrastructure issues only—not including what it could cost in public health concerns.

In a separate The New York Times article published Saturday (Jan. 9), residents expressed their frustrations in the wake of what has become a disaster.

“It’s ridiculous we have to live in such a way,” Colette Brown told the newspaper. “Put yourself in our shoes. It’s hurting kids, the elderly. It’s hurting all of us.”

Elected officials and both state and federal agencies have been pointing their fingers at each other for causing—and not quickly fixing—the problem since it was discovered in late 2014.

Residents have been blaming both as they filed multiple lawsuits against elected officials and appointed government personnel.

In a report released in December, Snyder’s appointed task force blasted Michigan’s Department of Environmental Quality and its response to the problem, the Times said.

The task force found that DEQ’s response to health concerns “was often one of aggressive dismissal, belittlement and attempts to discredit these efforts and the individuals involved.”

The approach was “completely unacceptable,” according to the report.

Wyant had been telling residents for months that the water supply was safe—even though they had research to the contrary, the Times said.

Previous reports indicate that the city and state knew the pH level had been trending downward since the end of 2014.

That’s a sign the water was getting more acidic and likely to be more corrosive—causing the lead to travel with the water—reports said.