Just over two years after breaking down in its first days of digging, “Bertha,” the tunnel boring machine excavating the new State Route 99 tunnel in Seattle, is on the move again. 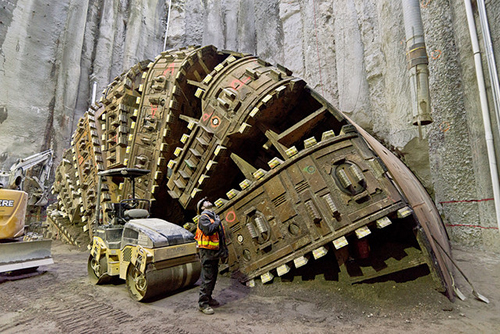 WSDOT
Before Bertha began drilling again, crews backfilled the access pit around the machine with a concrete-sand mixture and material removed during excavation; at this stage, only part of the shield and cutter head remained visible.

At five stories tall, Bertha is the largest drill of her kind, according to the magazine.

Back to the Grind

According to a statement from the Washington State Department of Transportation (WSDOT), crews began testing the repaired SR 99 tunneling machine Dec. 22.

Seattle Tunnel Partners (STP), WSDOT’s design-build contractor for the tunnel project, intended to test the tool by tunneling a short distance farther in the 120-foot-deep access pit tunnel before giving crews a break for the holidays.

"Testing the machine in the conditions it will face during the rest of the tunnel drive is a critical part of our work to resume full-production mining," Chris Dixon, STP project manager, said at the time.

"The next several hundred feet of excavation will give us the information we need to make final adjustments before we tunnel beneath the viaduct and downtown," he added.

Before securing the site for the holiday break, crews were able to advance the boring machine forward through the filled-in pit over the course of a day. This allowed them to test its performance while also mining the 6.5 feet needed to install the next concrete ring—the 160th for the project—at the bottom of the access and repair pit.

When operations resumed in the new year, STP Bertha dug another 6.5 feet forward to build the tunnel’s 161st concrete ring, WSDOT announced Jan. 4. By that afternoon, the machine’s cutter head was positioned near the northern wall of the access pit.

STP prepared to mine through the approximately 15-foot-thick concrete wall of the pit, which would take the machine into native soils, which would provide the environment for the next stage of testing.

This section of the tunnel route includes an underground wall that was built to protect the existing Alaskan Way Viaduct aboveground while crews continued to test the machine.

By Thursday (Jan. 7), WDOT said Bertha had broken through the access pit wall late in the day and was now tunneling in Seattle soil.

Now approaching South Main Street, near Pier 48, Bertha is digging well below the area’s fill soil, according to WSDOT. The top of the machine is approximately 80 feet below the surface in a mixture of glacially compacted material.

STP has mined 73 feet and installed 12 more concrete tunnel rings since Bertha first moved forward in the pit on Dec. 22, the agency said.

As reported earlier, precast concrete liner segments—each weighing 3,800 pounds and measuring 6.5-feet in length—are being used to form the “ring” in the tunnel behind the front end of the boring machine. WSDOT indicated in August that 185 rings had been placed in the approximately 1,000 feet of the tunnel dug prior the machine’s breakdown.

The crews are now pushing forward to a planned maintenance stop 450 north of the access pit. Bertha is expected to reach this stopping point in late January.

This area is the third and final protected maintenance stop, or safe haven, that STP built prior to the start of tunneling.

According the STP’s most recent schedule, the machine will spend up to one month at the top while crews perform maintenance and make any necessary final adjustments before tunneling beneath the Alaskan Way Viaduct.

Tunneling under the viaduct will require a full closure of SR 99 through downtown for approximately two weeks, said WSDOT. The contractor's latest projections show that the closure will occur in March, but the actual closure date will depend on Bertha's progress.

Most of the existing bridge deck has since been replaced with new roads, and the viaduct itself will be replaced by the tunnel.

The 1.7-mile-long tunnel is expected to boast an inside diameter of 52 feet (15.8 meters), allowing it to hold the planned double-deck roadway.

Bertha was out of commission since December 2013, when dirt got into a bearing, causing the machine to overheat and damaging the seal system after having only dug 1,000 feet.

While the machine was under repair, STP continued essential work at the future tunnel portals, including construction of ramp and highway connections, and the buildings that will house tunnel operations, WSDOT indicated.

The drill was returned to the access pit in August, after repairs were made to the cutter head, but the work to reconstruct the front shield and reconnect wires, hoses, cables and pipes was expected to take a few more months to accomplish.

In October, STP announced that repairs were taking longer than expected, and they pushed the restart date back to Dec. 23, a deadline they met.

STP and Bertha's manufacturer, Hitachi Zosen, are responsible for the repair effort and schedule. Their insurance companies were also reported to be involved in a battle over who is liable for covering the costs of Bertha’s repairs.

The entire $1.35 billion tunneling project is expected to be complete by April 2018.