Known as a manufacturer of specialized structures and vessels used in the oil, gas and marine industries, Gulf Island Fabrication Inc. is extending its reach into the Gulf Coast market through the acquisition of LEEVAC Shipyards LLC.

Houston-based Gulf Island announced the acquisition in a Jan. 4 statement.

Dated Dec. 23, the asset purchase agreement indicated a purchase price of  $20 million for the shipyard assets

Headquartered in Covington, LA, LEEVAC Shipyards is a shipbuilder with a 102-year history of designing, manufacturing and launching a variety of vessels for every aspect of the maritime industry. 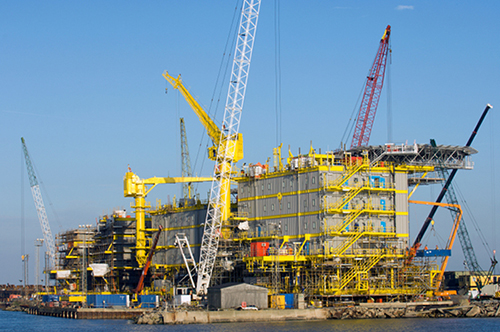 © iStock.com / RobHowarth
Gulf Island Fabrication, a manufacturer serving the oil, gas and marine industries, announced the acquisition of LEEVAC Shipyards at a purchase price of $20 million.

Gulf Island, founded in 1985, is seeking to expand its facilities and services to increase fabrication capacity and to invest in employee training and technology to meet the changing needs of an evolving energy industry, according to its website.

Through this acquisition, Gulf Island will obtain “substantially all” of LEEVAC’s assets, including LEEVAC’s leasehold interests at its marine fabrication facilities in Jennings, LA, and Lake Charles, LA, as well as substantially all of LEEVAC’s machinery and equipment.

Kirk Meche, Gulf Island’s president and chief executive officer stated that “the closing of the acquisition of the LEEVAC assets achieves one of the management team’s key strategic initiatives: “expanding our marine fabrication and vessel repair and maintenance presence in the Gulf South market and diversifying our fabrication capabilities.”

Meche told NOLA.com | The Times-Picayune that his company does not plan to change operations and staffing levels at the acquired shipyards and at LEEVAC's Covington headquarters.

“I want to personally welcome the former LEEVAC employees who have joined our team,” Meche added.

“To compete in today's marine fabrication marketplace and serve an increasingly more sophisticated customer, you must have access to the best talent, tools, and facilities,” he said, “and I believe this transaction creates a group of shipyards that will better meet the demands of the market."

Much of Gulf Island’s work was focused on oil and gas fabrication throughout its history, but ship repair work, he said, provided a chance to diversify and protect the company against future declines in the energy industry.

According to the news site, Gulf Island had been struggling to sign new work as oil prices dipped. In November, the company released roughly 400 workers from its San Patricio County, TX, site following the completion of a major fabrication project.

The $20 million purchase price was subject to a working capital adjustment under which Gulf Island received at closing a dollar-for-dollar reduction for the assumption of certain net liabilities and settlement payments from sureties on certain ongoing fabrication projects that were assigned to Gulf Island in the transaction.

It has six subsidiaries located in Houma, LA; Houston; and Aransas Pass, TX.