The artist behind the iconic “bleeding rainbow” mural in Detroit has filed a copyright suit against the owner of the vacant brick building it adorns. 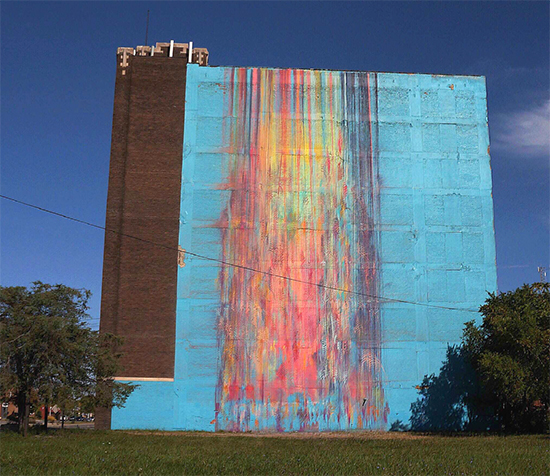 The building owner has told media outlets it disagrees with Craig’s interpretation with the law as well as the “facts” of the dispute, according to the Associated Press.

The lawsuit was filed Tuesday (Jan.5) in the U.S. District Court for the Eastern District of Michigan Southern Division.

Craig wants The Illuminated Mural, painted in 2009, to remain on the side of a nine-story, Albert Kahn-designed building, and is asking a federal judge for help under the Visual Artists Rights Act of 1990, which protects artistic works from “distortion, mutilation, or other modification,” according to the complaint.

The piece was created by pouring more than 100 gallons of paint from the rooftop.

The colors were allowed to drip and fade together and the artist said she used a variety of tools, including fire extinguishers and salad dressing bottles, to spread the paint across the building’s façade.

The complaint describes the mural as a “flowing watercolor of multicolored paint splatters.”

The Detroit Free Press has said the art is “[m]aybe Detroit’s most drop-dead gorgeous mural,” the complaint further notes. Craig has received accolades for the work and it serves as a tourist attraction.

Craig gained permission to paint the piece from the previous owner Boydell Development Corp. and received $33,000 from the College for Creative Studies’ Community + Public Arts program to complete the project. She lived in and used the first floor of the building as her studio space for several years.

The artist argues that a final agreement between she and Boydell explained that the mural was “intended to be long lasting for the Northend community,” and that the company agreed the mural would “remain on the building for no less than a ten year time period,” the complaint states.

The property changed hands in 2012 and Craig moved out of the building.

Craig never “expressly agreed” to a waiver of her lifetime rights of attribution and integrity under the VARA, including her right to protect the work from “destruction,” the artist argues.

The complaint states that due to the layers of paint and how it was completed, the piece cannot be “feasibly removed or relocated,” and is otherwise in danger of destruction or mutilations by, for example, installing windows.

“Princeton has repeatedly threatened Craig with outright or partial destruction of [the mural] as it attempts to convince her to sign away her rights,” according to the suit.

The artist seeks an injunction to bar the developer from damaging or altering the artwork as well as requiring Princeton to notify potential buyers about the mural’s protected status.

In its coverage of the case, CityLab suggests Craig may be successful, noting a similar case brought under VARA.

“Kent Twitchell, another muralist, sued the federal government after it painted over his famous 1987 mural, Ed Ruscha Monument, on the side of a building in Los Angeles in 2006. The artist won a $1.1 million settlement in the case,” the report said.