The Sweet Sound of … Concrete?

Many music lovers prize old-school records as providing the ultimate listening experience. But would an audiophile find a single made out of concrete to their satisfaction?

Although not intended to launch a new recording trend, Ricardo Kocadag from the Department Safety of Structures in the Bundesanstalt für Materialforschung und -prüfung (BAM) (the Federal Institute for Materials Research and Testing), chose ultra-high performance concrete (UHPC) as the medium to record a copy of the Rolling Stones’ “(I Can’t Get No) Satisfaction”—and it works. 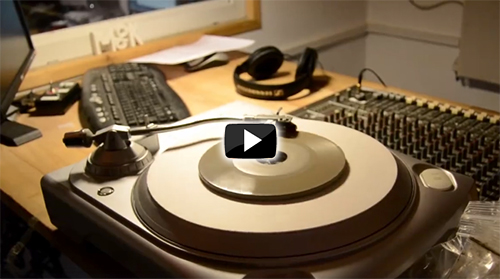 BLN.FM
Ricardo Kocadag chose ultra-high performance concrete (UHPC) as the medium to record a copy of the Rolling Stones’ “(I Can’t Get No) Satisfaction”—and it works.

“The UHPC record shows that concrete can do more than just be a building material," Kocadag said.

The Stones on Stone

A mixture of cement, aggregates, additives, admixtures and water, UHPC is in use as an extremely versatile material for the construction of bridges or buildings.  However, in addition to its construction site advantages, the concrete is able to be finely finished and detailed, leading to an added functionality, BAM announced in a statement: it can be used for the production of data carriers.

For this purpose, BAM said, adjustments to the UHPC surface at the microstructural level enabled data to be saved and replayed on the material. Kocadag demonstrated the ability through a custom recording of “Satisfaction” on a 6mm (0.236 inch) disc of concrete.

Concrete and its innovative developments, such as UHPC, are among the topics comprising BAM’s research and testing focus. BAM not only evaluates the safety and durability of these building materials but also their innovative applications. Agency scientists working in the field of structural safety are researching how the distinctive properties of UHPC can be "adjusted" by adding superplasticisers, fine fillers and reactive additives.

They can, for example, correctly model any structure down to the micro level, which enables a lasting functionalisation of concrete surfaces, as seen in Kocadag’s record.

"With this record made from UHPC, we want to show that surface functionalisation can adapt material properties to their respective requirements and applications,” Kocadag said.

"Our UHPC record can be played on any conventional record player—and in excellent quality," adds Dr. Götz Hüsken, who contributed to the optimization process.

The BAM Federal Institute for Materials Research and Testing is a senior scientific and technical institute with responsibility to the Federal Ministry for Economic Affairs and Energy.

Its mission as a federal institute for materials technology and chemical engineering is to ensure ongoing safety in technology and chemistry through research and development; testing, analysis, approval and certification; and consultation, information and advice within an objective of promoting German industrial development.

It focuses on the areas of energy, infrastructure, environment, materials and analytical sciences.