Researchers at two universities are taking inspiration from structures found in the insect world to create an anti-reflection coating that retains conductivity in order to improve electronic device performance.

Engineers at the University of Illinois at Urbana-Champaign (UIUC), in collaboration with researchers at the University of Massachusetts at Lowell (UMass Lowell), are developing a coating that will let light pass through without impeding the flow of electricity. Their target result is to increase efficiency in devices such as LEDs, solar cells and sensors, UIUC announced Dec. 8. 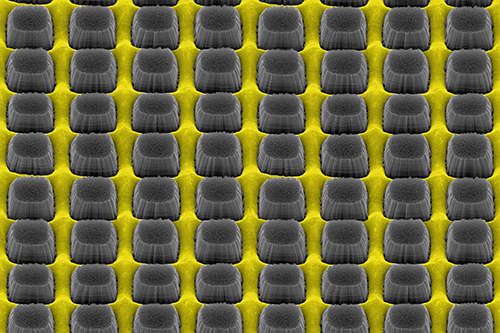 Daniel Wasserman, University of Illinois at Urbana-Champaign
Inspired by a moth's eye, the team's coating is a specially engraved, nanostructured thin film that allows more light through than a flat surface while also providing electrical access to the underlying materia

“The ability to improve both electrical and optical access to a material is an important step towards higher-efficiency optoelectronic devices,” said Daniel Wasserman, a professor of electrical and computer engineering and member of the Micro and Nano Technology Laboratory at UIUC.

The researchers, led by Wasserman, just published their findings in the journal Advanced Materials. Their work was underwritten by the National Science Foundation and Lam Research.

According to the team, the coating is a specially engraved, nanostructured thin film that allows more light through than a flat surface would, yet also provides electrical access to the underlying material—a critical combination for optoelectronics, devices that source, detect and control light.

As study co-author Viktor Podolskiy explained, it is well known that “structuring the surface of a material can increase light transmission.” Podolsky is a professor at UMass Lowell.

In their work, the university engineers patterned the film surface in an array of microscopic pillars similar to those found on the surface of a moth’s eye.

According to Podolsky, at certain wavelengths and angles the tiny nanopillars in this moth’s-eye pattern can “beat” a mathematical model called the Fresnel equation, which describes how light is reflected and transmitted at the interface between transparent and opaque materials, such as a semiconductor and air.

However, while these patterned surfaces aid in light transmission, they can also hinder electrical transmission by creating a barrier to the underlying electrical material, according to Wasserman.

The team was able to address this issue in its research as well.

The university R&D team used a patented method of metal-assisted chemical etching called MacEtch, developed by fellow researcher Xiuling Li. Li is a professor of electrical and computer engineering at UIUC as well as a coauthor of the new paper.

The researchers used MacEtch to engrave a patterned metal film into a semiconductor, which the team refers to as a “buried coating,” to create an array of tiny nanopillars rising above the metal film.

These nanopillars featured gaps smaller than the wavelength of incident light, according to The Engineer. By adjusting the size of the grating formed by the pillars and the depth at which the coating is buried, engineers can further fine-tune the material’s optical properties.

According to the research team, they were able to create partially coated material that outperforms an untreated semiconductor.

“Remarkably, we can improve our optical transmission and electrical access simultaneously,” he added.

With metal covering roughly half of the surface, the researchers’ technique can transmit about 90 percent of light to or from the surface, they found. In comparison, a bare, unpatterned surface with no metal can only transmit 70 percent of the light and has no electrical contact.

“We are looking to integrate these nanostructured films with optoelectronic devices to demonstrate that we can simultaneously improve both the optical and electronic properties of devices operating at wavelengths from the visible all the way to the far infrared,” Wasserman said.