A street artist in Montana has figured out how to use the words “Butte-ification” and “dumpster” in the same sentence.

Trent Curnow has been using his spray paint talents to help make the trash receptacles more aesthetically acceptable in his hometown of Butte. Residents there told NBCMontana that they like what Curnow provides for the city. 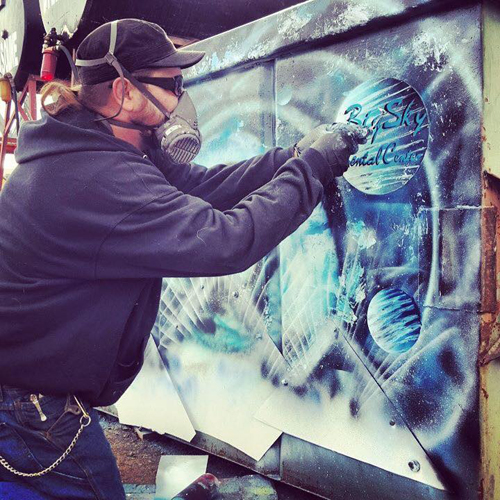 Curnow has been showing off his skills and beautifying the city in his nontraditional way since October, the news station said. For each dumpster, he uses spray-paint and regular household items—such as newspapers and plastic bags—to transform a dumpster into a work of art.

“I’m very untraditional,” said Curnow, whose business—Montana Spray Painter—says on its Facebook page that the artist offers spray paint training to others as well as a variety of artistic services.

“I like a lot of old-school things, and I like old, lost arts. Things that have been kind of forgotten over the years due to technology and advancements.”

The artsy dumpsters are helping others look at the Mining City in a new way. Several timelapse videos on Cunrow’s Facebook page show the artist painting the dumpsters have over a million views combined.

“For the small investment it takes to get it done and the return on investment, how good it turns out looking, compared to what they normally look like, I think they’re great," Dan Steele, owner of Steele’s Furniture TV Appliance in Butte, told the news station. "I think everybody should do it.”

Business owners pay Curnow to paint their dumpsters with permission from McGree Trucking, which owns the trash bins. The price of Curnow’s art varies by size and conditions. He’s painted 13 dumpsters since starting the project and already has 13 more lined up.