Slippery Paint? Not Quite, Skaters Say

Non-stick coatings have their places, but a skating park apparently is not one of them.

Hong Kong’s Leisure and Cultural Services Department (LCSD) has removed the non-slippery paint on a skateboarding fun box at an extreme sports park following complaints that the new surface was no longer slippery, according to a Nov. 24 article in the Hong Kong Free Press.

Meanwhile, skaters have taken to social media to criticize the LCSD for not realizing that having slippery paint is necessary for good skateboarding. They have said that better protocols and more professional guidance are needed in making decisions related to the park, the publication reported. 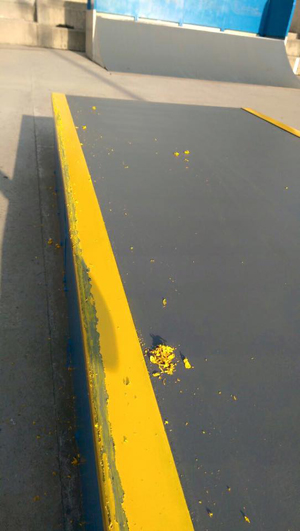 Photos: Facebook / Po WaH
A skateboarder posted photos to Facebook to demonstrate how non-slippery coating used on skate ramps at a Hong Kong park was causing problems for the skaters.

One photo showed a skateboarding fun box with its edges painted with yellow lines, while another shows where the coating has failed.

The caption of the post, according to the Free Press, read, “At a skateboarding park in Mei Foo, a fun box used for grinding was painted with anti-skid paint, such that the originally smooth platform was no longer slippery. When the fun box was used [for skating] and the paint scratched off, the management company wanted to sue for damage to public property…”

Stuart, who brought the problem to the group’s attention, said, “[The] LCSD in [Lai Chi Kok] have painted the edges of the fun box in a grippy yellow—what is this yellow line? The MTR? Will the ledge be safer when it’s yellow? Anyway, the ledge is now grippy and does not slide or grind.

“You would think LCSD would know how skaters use this obstacle, especially after more than 10 years watching us skate it,” Stuart continued. “Whoever made this happen has no idea!”

An LCSD spokesperson responded to the skateboarders' concerns and told the Free Press that the matter was only a misunderstanding.

“In September, our staff found that at the extreme sports park in Lai Chi Kok, some of the facilities were rusty and their paint was chipping off, so we arranged for a paint job to return them to their original appearance,” the spokesperson said.

“However, following a suggestion submitted by the Hong Kong Federation of Extreme Sports a few days ago, we learned that the paint could be an obstruction to the sport of skateboarding. After a review, the Department has removed the paint for the convenience of skateboarders.

“As for the matter of the staff giving the citizen a verbal warning, after an investigation, we believe that it is merely a misunderstanding,” the spokesperson continued. “The manager of the venue has reminded the relevant employee to be sincere and kind when responding to comments and suggestions from members of the public.”