New Shake-Absorbing Brick on the Block

A newly developed building material may help buildings stand strong in the face of an earthquake.

Researchers from the Institute of Science and Concrete Technology of Polytechnic University of Valencia in Spain say the technology, called Sisbrick, is suitable for use in partition walls—setting it apart from other specialty materials made to improve how buildings respond to tremors.

A video (in Spanish) describing the technology is here.

Sisbrick can absorb horizontal movements caused by earthquakes and thus, is able to isolate the partition walls from the main building frame, the team reported in a research announcement. 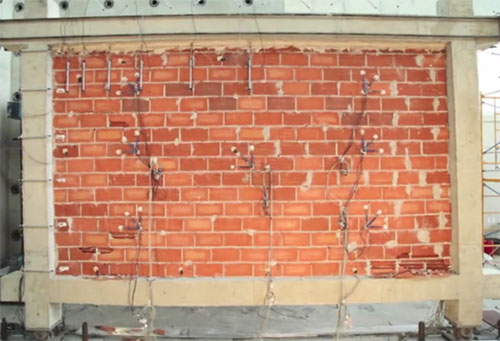 Screenshot via Polytechnic University of Valencia
Sisbrick can absorb horizontal movements caused by earthquakes and thus, is able to isolate the partition walls from the main building frame, according to the researchers.

Researcher Luis Pallares explained in a statement (translated) that the technology “serves as an insulating barrier, avoiding the transfer of loads from these partition elements to the main structure.” The benefit would be less damage to the structure.

Further, the technology takes the form of a conventional brick and can be installed using traditional building techniques, the team relates.

Only a few of the materials are needed to achieve the seismic isolation, the team says.

Laboratory tests showed that, if the bricks are arranged in a specific order, a small amount can deliver significant gains in seismic wave absorption, phys.org explained in its report on the technology.

“Specifically, partition walls that incorporate Sisbricks can absorb horizontal movements in the order of three times greater than those that do not,” according to that report.

While the University has reportedly patented the technology, it is looking for partners to help bring this product to market.