Fearing ongoing corrosion damage, federal regulators have ordered the owner of a 130-mile pipeline in California to purge the system, though idle, of the crude that remains in the lines.

Plains All American Pipeline LP, which also operated nearby Line 901 that spilled more than 100,000 gallons of crude on the coast near Santa Barbara in May, has been ordered to purge oil from its Line 903, Reuters reported Friday (Nov. 13).

The U.S. Department of Transportation's Pipeline and Hazardous Materials Safety Administration (PHMSA) issued the order out of concern that the corrosion that led to the failure of Line 901 would also affect the neighboring Line 903, which was constructed and operated in the same way. 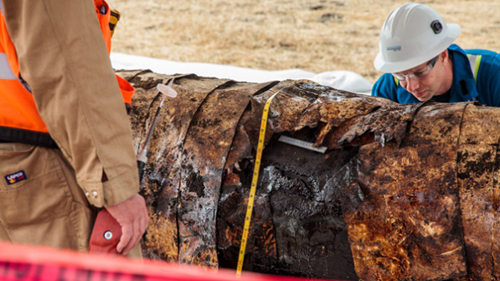 Photos: Br
Federal regulators have ordered Plains All American Pipeline LP to purge its 903 line after it found the line could be subject to the same corrosion that caused a spill on a neighboring pipeline in May.

PHMSA indicates that Line 903 shows "similar corrosion characteristics" as Line 901. Additionally, the unprocessed crude in the line could contain corrosive elements that would lead to another break, especially as the rust inhibitor intended to prevent corrosion becomes less effective over time.

“This unprocessed crude may contain water, natural gas and other impurities that contribute to internal corrosion,” the order reads, as reported in the Pacific Coast Business Times.

“[T]he biocide and rust inhibitor in this crude oil will begin to lose effectiveness around November 2015, adding to the risk of accelerated internal corrosion on Line 903,” it continued.

Operation of Line 903 was halted on May 28, with the exception of a 15-mile section from Pentland to Emidio that is operating intermittently at a reduced pressure.

Plains Pipeline to Be Purged of Crude: Corrosion in Line 903 Likely by Now https://t.co/hq3Qfg0dT8 pic.twitter.com/XH74xvST35

The order states that the pipeline will remain shut down after it is cleaned out, tested and filled with inert gas that will inhibit further degradation, according to the order.

According to reports, PHMSA’s investigations show that Plains, based in Houston, did not have an effective corrosion control program in place.

The agency found that inspections done over the last 10 years, via a smart pig diagnostic tool that moves through the pipeline, underestimated the level of corrosion in the pipe.

Then, when sections of pipe showing corrosion were dug up, Plains failed to share the first-hand field measurements with the vendor in charge of the internal inspection.

This sharing of field data is common practice in the pipeline industry in order to help the inspector ensure the accuracy of its inspection tool, the Los Angeles Times indicated.

“A PHMSA independent review of Plains Pipeline’s in-line inspection surveys discovered instances where the tool miscalculated the degree of corrosion occurring in specific portions of Lines 901 and 903,” the order said, adding that the tool underestimated the corrosion.

These questionable inspection records were also cited in a lawsuit brought against Plains by one of its shareholders in August.

Although the company indicated it does not agree with all of PHMSA’s findings, Plains has agreed to purge the line. Water or natural gas will be used to flush out the crude, according to the Santa Barbara Independent.

When complete, an independent contractor will be required to inspect it. It may not be restarted until authorized by PHMSA.

Plains estimates that spill-related costs could reach $257 million, including fines, settlements and cleanup, Reuters said. That amount does not include lost revenue from the shutdowns, the company said in a quarterly filing with regulators.