Scotland to Have Floating Wind Farm

An international energy company based in Norway has received approval from the Scottish government to build the first floating wind farm in the world.

Hywind Scotland, a division of Statoil’s New Energy Solutions venture, is planning to build a 30 MW wind turbine farm on floating structures at Buchan Deep, according to a Statoil statement. The new farm will be about 25 kilometers (15.5 miles) from Peterhead in Aberdeenshire, Scotland.

The new plant will be capable of generating 135 GWh of electricity per year, according to an article in SiliconeRepublic. Statoil said in its statement that the farm will power about 20,000 homes. 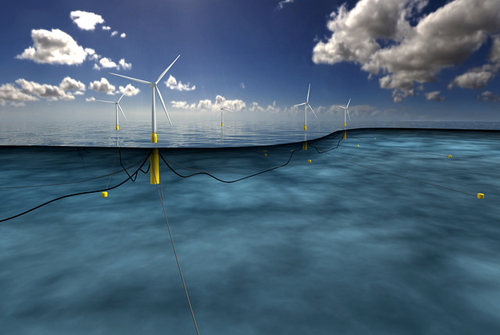 “This will further increase the global market potential for offshore wind energy, contributing to realizing our ambition of profitable growth in renewable energy and other low-carbon solutions.”

Hywind is an offshore wind technology developed by Statoil, which has been testing the operation in a prototype installed off the island of Karmoy in Norway. According to Statoil, the Hywind design is competitive with other floating designs in water that is 100 meters (328 feet) or more deep.

Fixed turbines are optimal in more shallow waters, according to Statoil. For them, 20 to 50 meters (66 to 164 feet) is ideal.

The pilot park in the waters off of Scotland will cover about 4 square kilometers (2.5 square miles) and have a water depth of about 95 to 120 meters (312 to 394 feet), the company said. The average wind speed in that area of the North Sea is about 10 meters (33 feet) per second.

Statoil said its company will invest about NOK 2 billion (about US$230 million) in the project, which is about 60 percent to 70 percent less per MW than the Hywind demo project the company built in Norway.

SiliconeRepublic said Statoil’s Scotland windfarm will use five 6 MW turbines, which will be attached to the seabed by a three-point mooring and anchor system. An inter-array of cables will transport the electricity to the shore.

John Swinney, Scotland’s Deputy First Minister, said the Hywind project is a testament to Great Britain’s energy sector, according to the Statoil statement.

“The momentum is building around the potential for floating offshore wind technology to unlock deeper water sites,” said Swinney. “The ability to leverage existing infrastructure and supply chain capabilities from the offshore oil and gas industry create the ideal conditions to position Scotland as a world leader in floating wind technology.”

Offshore wind already has a foothold in Europe with 10 GW installed capacity, and the potential to reach more than 100 GW worldwide by 2030, Statoil said.

SiliconeRepublic also said the news comes as other wind farm activity is picking up off the British coast. Danish company Dong recently confirmed its plans to build the world’s largest wind farm in the Irish Sea. And the U.K.-based Carbon Trust said Hywind’s floating wind concept could reduce energy-generating costs below £100 (US$152.12) per MWh.

Statoil said it already contributes to the U.K.’s energy sector. In addition to the 88 turbine Sheringham Shoal offshore wind farm off the coast of Norfolk and as a partner in the Dudgeon offshore wind farm, the company also supplies 20 percent of British natural gas. Statoil’s Global Strategy and Business Development division is based in London.

Production of the Scottish Hywind farm is expected to start in 2017, the company said.