The U.S. shipbuilding and repair industry plays a significant role in the state of the U.S. economy, according to recent data released by the U.S. Department of Transportation’s Maritime Administration (MARAD) this month.

Reporting figures based on 2013 data, MARAD’s report, The Economic Importance of the U.S. Shipbuilding and Repairing Industry, notes that shipyards provide 110,000 jobs across the country and contributed $37.3 billion to the Gross Domestic Product in 2013. 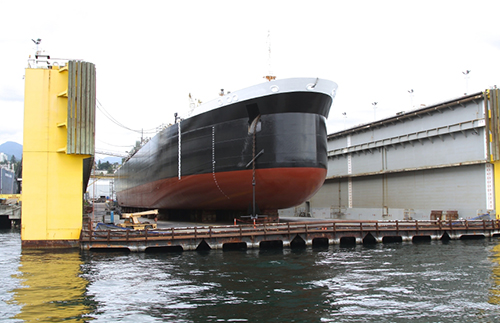 © iStock.com / davelogan
U.S. shipyards provide 110,000 jobs across the country and contributed $37.3 billion to the Gross Domestic Product in 2013, according to a recent MARAD report.

Secretary of Transportation Anthony Foxx announced the release of this data in a Nov. 3 Capitol Hill meeting sponsored by the Shipbuilders Council of America and the Navy League of the United States.

In his remarks, as reported by Seapower magazine, Foxx looked back to the meaningful role shipbuilding played in American independence as far back as 1789, adding:

A Snapshot of the Industry

According to MARAD’s parameters, the U.S. shipbuilding and repair industry is made up of firms that primarily operate shipyards—which it defines as fixed facilities with drydocks and fabrication equipment. The shipyards are engaged in ship construction, repair, conversion and alteration, and production of prefabricated ship and barge sections.

It also includes manufacturing facilities outside the shipyard, as well as those that provide parts and services for activities within a shipyard, such as routine maintenance and repair from floating drydocks not connected with a shipyard.

MARAD classifies 124 sites in the U.S. within 26 states as active shipyards. There are also more than 200 shipyards performing ship repairs or which are able to build ships but are not actively engaged in shipbuilding.

While shipyards are present along the nation’s inland waterways (for example, the Great Lakes, the Mississippi River and the Ohio River), most shipyards are sited in coastal states.

According to MARAD, employment is concentrated to a relatively small number of coastal states: the top five states—Virginia, Mississippi, Louisiana, Connecticut and California—account for 63 percent of private employment in the industry.

When taking direct, indirect and induced impacts into consideration, total economic activity related to the industry jumps to 399,420 jobs, $25.1 billion in labor income, and $37.3 billion in GDP.

In reporting on capital expenditures, MARAD relies on data from the U.S. Census Bureau. It found that in 2013, the industry spent $978.6 million on new and used capital assets, up from $834.4 million in 2012. The majority of such spending is on new structures and equipment.

The largest expense for ship builders is purchases of raw materials and supplies used in the construction and repair of ships, including paints, steel plates, copper tubing, aluminum, and iron castings. These purchases account for an estimated 48.4 percent of total industry costs, according to MARAD.

In terms of output, shipbuilders delivered 1,147 vessels in 2013; however, 2014 activity shows a dip in activity, with 1,067 vessels of all types delivered last year.

Additionally, despite an increase in foreign competition, exports by U.S. shipbuilders have strengthened in recent years, rising to $1.2 billion in 2014 (representing 4.6 percent of industry revenues).

As a result, the U.S. shipbuilding industry has run a trade surplus in six out of the last nine years and a cumulative trade surplus of $1.5 billion over this period.

In a Fast Lane blog post announcing availability of the report to the public, Foxx wrote that the DOT is proud to support the country’s shipyards and provide more opportunities for hardworking Americans.

One of the ways the department has been working to promote shipyard activity and growth is through the Title “Eleven” (XI) Program, which provides loan guarantees for ship-owners who build vessels all along our waterways.

As an example, Foxx says that the department and MARAD are currently guaranteeing about $1.7 billion in U.S. shipbuilding projects, such as the world’s first LNG-powered containerships, built at NASSCO in San Diego.

Construction on the second vessel is providing employment for 600 workers, Foxx wrote. When complete, these two vessels are estimated to support employment for 60 full time mariners; 195 shore side personnel; and more than 1,600 dock and port workers, truckers, vendors and repairmen.

According to Foxx, with programs like this, the DOT “will fight to ensure that our nation’s shipbuilders have a robust and promising future.”