An Alaskan construction company has agreed to pay the federal Environmental Protection Agency $140,000 to settle allegations that it improperly handled and stored hazardous paint and roofing waste.

UIC Roofing and UIC Construction Yard, subsidiaries of UIC Construction Services, of Anchorage, each faced charges that they had violated the federal Resource Conservation and Recovery Act (RCRA), according to a statement the EPA released Wednesday (Nov. 4).

The companies each entered into separate consent agreements with the EPA for failing to follow federal guidelines required under the RCRA, the EPA said. UIC Roofing agreed to pay $59,724 to settle the claims, while UIC Construction Yard agreed to pay $80,456, according to the consent orders.

According to the consent agreements, the company that became known as UIC Roofing transported two 55-gallon drums and one cubic yard box containing paint-related and roofing-related hazardous waste to property owned by UIC Construction Yard on Oct. 19, 2010.

A spokeswoman for the EPA said Thursday (Nov. 5) that the waste materials included F406 Waterstop, Code Blue, Neoguard Epoxy and miscellaneous paints. Each of the waste products was ignitable or toxic, or both, the spokeswoman said. 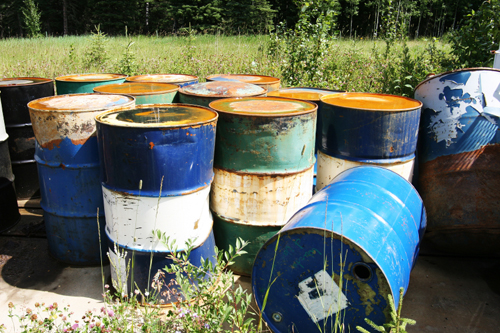 ©iStock.com / wolv
According to the EPA, UIC Construction Services has agreed to pay $140,000 for improperly moving and storing paint- and roofing-related waste and violating the RCRA.

The consent agreement also said the waste was described as containing several chemicals, including arsenic, barium, cadmium, chromium, and lead.

In the EPA’s statement, the agency said UIC Roofing—which was known as Rain Proof Roofing LLC at the time of the alleged incident—failed to obtain generator and transporter identification numbers prior to transporting hazardous waste; did not prepare a hazardous waste manifest; and did not dispose of the waste at an approved RCRA facility.

A message left with the company on Thursday seeking comment was not immediately returned.

According to the EPA, UIC Construction Services had 30 days from Oct. 16 to make the payments or face additional penalties.