Changing the color of wall paint soon could be as simple as spraying the walls with water, swiping an app on a smartphone or even just turning on the heat.

A research team in China has developed a coating that relies on nano-size cells that can be controlled to inflate or deflate, and, as a result, deflect visible light in different wavelengths. According to a recent article in the South China Morning Post, the result is a wall that acts like a chameleon—and changes color to match the environmental change.

“Imagine a house that will cheer you up with a bright color when it rains,” Du Xuemin, the lead scientist of the project, told the daily newspaper.

“Imagine the fun of instantly changing the color of everything, from the wall to the floor to the furniture, just by swiping a smartphone,” said Du. “Our paint will make these dreams come true.

The team, whose members work with the Shenzhen Institutes of Advanced Technology (SIAT) under the Chinese Academy of Science (CAS), recently had the results of its study accepted for publication in the journal Sensors and Actuators B: Chemical. 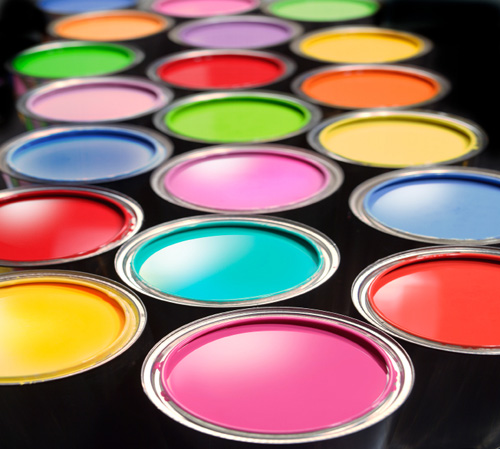 ©iStock.com / billyfoto
A research team in China has developed a nano-cell coating that can change colors rapidly by applying an electric charge, changing the room temperature or spraying water on it.

According to the research progress report on the SIAT website, Du and his colleagues developed "a color tunable electrochemical photonic device by using redox of metal ions as the trigger to tune the band-gap of photonic crystal beads." In other words, the cells change color to a chemical reaction, and then back to their original color, without losing any of the color quality, the team said.

The daily newspaper said that in the core of each nano-cell is a kind of metal, such as copper. When electricity is applied to the cell, it gives it a positive charge that pulls the cell’s crystalline shell inward.

Other ways to cause the reaction? Spray the cells with water, or change the temperature of the room, the newspaper said.

The paint does not generate its own light and unlike the screens on electronic devices—such as Amazon’s Kindle—it is cable of generating many colors, not just black and white.

Du told the South China Morning Post that the biggest challenge was making the nano-cells. The diameter of each is only several-hundredths of the diameter of a typical human hair. Each cell’s uneven surface also has to be controlled precisely or the desired colors won’t come through.

Now that those issues are resolved, the team is producing a few dozen liters of the paint daily, the newspaper said.

“We are working with some companies in the chemicals industry to bring the technology from the lab to mass production,” said Du. “The idea of a paint that can change color like a chameleon has generated enormous interest.

“When the product will be available to consumers for home decoration depends on many factors,” the scientist continued. “In my conservative estimate, it will hit store shelves within three years.”