The dig on the Alaskan Way Viaduct replacement project underneath Seattle remains in limbo even as repairs continue on the site’s tunnel boring machine, nicknamed Bertha.

Reassembly of the idled machine is taking longer than expected, leading contractor Seattle Tunnel Partners (STP) to push back its restart date by one month. According to a revised STP timeline posted by the Washington State Department of Transportation (WSDOT) last week, Bertha will not resume tunneling until Dec. 23. 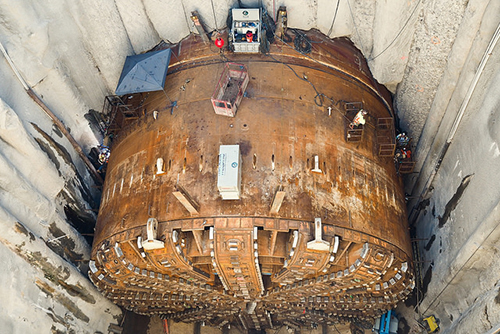 Photos: Washington State Department of Transportation
WSDOT announced that the start date to resume boring on the Highway 99 tunnel project has been pushed back until Dec. 23.

The 57-foot-diameter tunneling machine, built by Hitachi Zosen, overheated in December 2013, putting a stop to the tunneling. Seals were reported to have failed around the main bearing.

The unit was returned to the pit in August, after repairs were made to the cutter head and additional components were repaired or corrected, while welding and reconnecting of hoses, wires and cables were expected to wrap up after a few months.

This timeline revision puts the Highway 99 tunnel project a little more than two years over the planned completion date of December 2015. With tunneling now projected to be complete in January 2017, the $1.35 billion tunnel is scheduled to open in April 2018, according to WSDOT’s project update.

The adjustment to the schedule will help to ensure that crews get the time they need to successfully complete the repairs, WSDOT says.

Crews were working around the clock on the reassembly of the $80 million machine, the Seattle Times reported Oct. 14, including reconnecting hoses, wires, cables and welding shield pieces and reinforcement plates before testing the moving parts.

However, STP’s project manager, Chris Dixon, indicated that in the process of gauging placement, the crew is having difficulty maintaining the exact spacing of 14 to 18 mm needed between the rotating parts and fixed parts of the 4-million-pound front end, the Seattle Times reported Oct. 22.

“The movement of these gaps has been a real critical activity,” he said. “We’ve welded it in other places, and switched jacks around, to monitor these gaps.”

Open air testing of the machine was scheduled to occur the week of Oct. 12, but that has not been able to happen yet.

State tunnel officials presented the timeline to the state legislature’s Joint Transportation Committee on Oct. 22, the Times reported, adding that the team accepted the news “with a congenial attitude.”

However, the committee still sought to understand how the state had paid STP $1 billion of its contract when it has only drilled 11 percent of the tunnel.

Todd Trepanier, WSDOT’s Highway 99 administrator, assured the committee that STP is only paid for the work it has completed. “Even though the tunnel is stopped, they only have $300 million worth of work to do,” he said.

According to Trepanier, much of the work is nearly completed, including the north and south portals, the arched concrete segments that will form the tunnel walls, and the road decks on the Sodo side.

Getting the Ground Ready

In the meantime, STP began injecting grout (a mixture of cement and water) into the soil near Bertha to prepare the ground for the drilling to begin, the Times said in its Oct 14 report.

The process of “jet grouting” is required in Seattle tunnel projects, according to the paper, to control wet soil and assist in accurate drilling. However, for Bertha it serves an additional purpose—stabilizing the ground above the tunnel as the machine exits the pit. 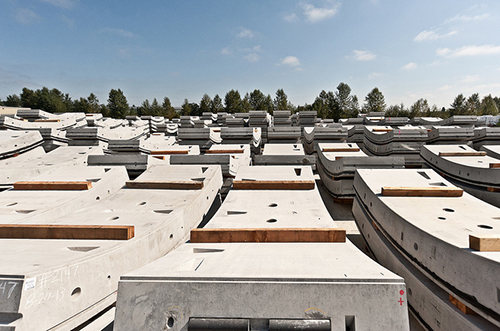 Puget Sound Business Journal
According to WSDOT, much of the work is nearly completed, including the north and south portals, the arched concrete segments that will form the tunnel walls, and road decks.

When Bertha leaves the ring-shaped repair vault and heads north, the west and east edges of the cutter would reach dirt while the north and south edges would still grind the curved wall of the concrete pilings.

According to WSDOT spokesperson Laura Newborn, the addition of grout along the ring makes sure the entire cutter head will scrape along a uniformly hard surface.

A WSDOT project update explained that the process would take up to six weeks. Crews will use a high-pressure pump to inject grout into the ground adjacent to the access pit’s north wall, creating a set of interlocking columns approximately five feet in diameter. The top of the columns will begin approximately 20 feet below the surface, and will extend down approximately 40 feet, stopping just above the tunnel route.

As reported earlier, insurance companies had become involved in a battle over Bertha’s repairs. They do not want to pay the $143 million in anticipated repair costs of a machine that cost $80 million to build. They claim that the design of machine was flawed.

Because of the short distance Bertha had covered in service, consensus held that Hitachi Zosen, the machine’s manufacturer, would be held liable for the repairs. If it had tunneled a little farther, the state or STP would be responsible for repairs.

Meanwhile, according to Puget Sound Business Journal, STP holds WSDOT responsible for the breakdown, having failed to tell it about an eight-inch pipe casing that ultimately led to the damage.

On Oct. 9, WSDOT issued a statement indicating they had filed suit against STP in King County Superior Court.

The filing was prompted by the recent court filings by STP and its insurance companies and was a step to ensure WSDOT will have a right to make legal claims in the future. This lawsuit does not prevent STP from pursuing claims under the terms of the design-build contract, WSDOT stated.

The transportation department said it intends to ask for a stay of its lawsuit until the project is completed and asked STP to join in this request. This delay in the lawsuit will allow for work on the SR 99 Tunnel Project to be completed before litigation takes place.

Reports indicate that the state has already sustained more than $3 million in overruns and expects another $75 million due to the stoppage.